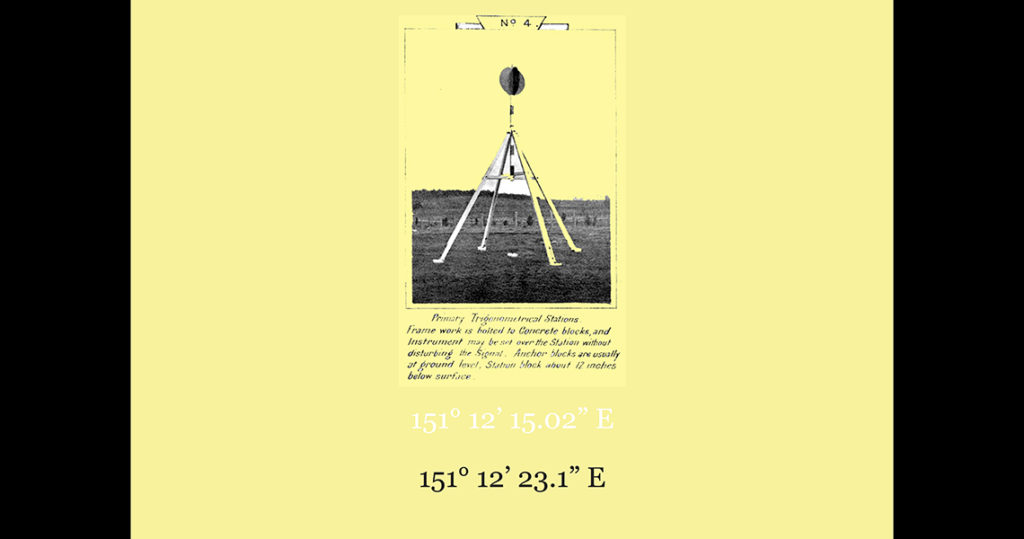 Take a left at The Shelbourne down Sussex Street. Trek along about 200 metres until you reach Druitt Place. Walk just inside the laneway – on your right is Station 22.

Over time, as surveying became a more established and governed practice, ‘trig’ stations and baseline markers were installed. These stones were expected to be enduring signposts, so that the survey baseline could be checked against movements caused by earthquakes or continental drifting, which as we now know is a reality in Australia.

Survey reference trees have rarely ever been considered important heritage artefacts, and then only from the perspective of surveyors and heroic narratives of pioneers and settlers. But this is a complex history – and one that is worth retelling for its contradictions and absences. More recent attention has been brought to the significance of old survey trees as part of environmental heritage, however this still overlooks the entwinement of nature and culture as colonists literally carved their path through the landscape marring trees along the way, not only in physical terms but as part of imposing the British Empire’s temporal and spatial order on the land.

The enigmatic image in today’s poster is a photograph with instructions for installing a primary trigonometric station, published in a report from 1913. As we saw at Station 15, the ambition to survey New South Wales still remained out of reach at this time. But it only required another fifty years for enormous ground to be covered, so that almost all of the planet was trigonometrically surveyed with the exception of remote regions of Brazil and Antarctica.

Up until a complete and accurate survey was made of the continent of Australia, there could be no local reference baseline (or quadrant). While Greenwich Meridian was supposed to be the basis for longitude, transporting chronometers from London was hardly an efficient way to calibrate time. The only other option available was to derive an origin for a local longitude from an astronomic observatory. Australia’s early competition for colonisation also led to there being several differing longitudinal origins, first at Sydney, then Perth Observatory, and later on at the Darwin Origin Pillar. Triangulation was also undertaken separately by different colonial governments based on partial surveys.

The problem of longitude remained a major hindrance to the progress of both colonial time and its reckoning on the land. Thinking about this in another way, not being able to define longitude was a means to evade the totality of the European empire of time – only for a little longer. The 1960s saw yet another an ambitious geodetic survey that aimed to correlate all existing work to complete the coverage of the continent. Our clue in this poster is one of the 2506 trig stations? – positioned all over the country.

Featuring a base mark and pillar supporting a strange round disc, these were often positioned on high ground to be visible from afar, to make a network of geodetic points as part of a unified geodetic system. While Global Navigational Satellite Systems (GNSS) have largely rendered these somewhat arcane symbols obsolete, some of Sydney’s earliest signal stations are still maintained as GPS reference points today (i.e. the antenna at Fort Denison in figure 2), although Sydney Observatory is listed as destroyed.- needs some clarity, reads like all of Sydney Obs is listed as destroyed