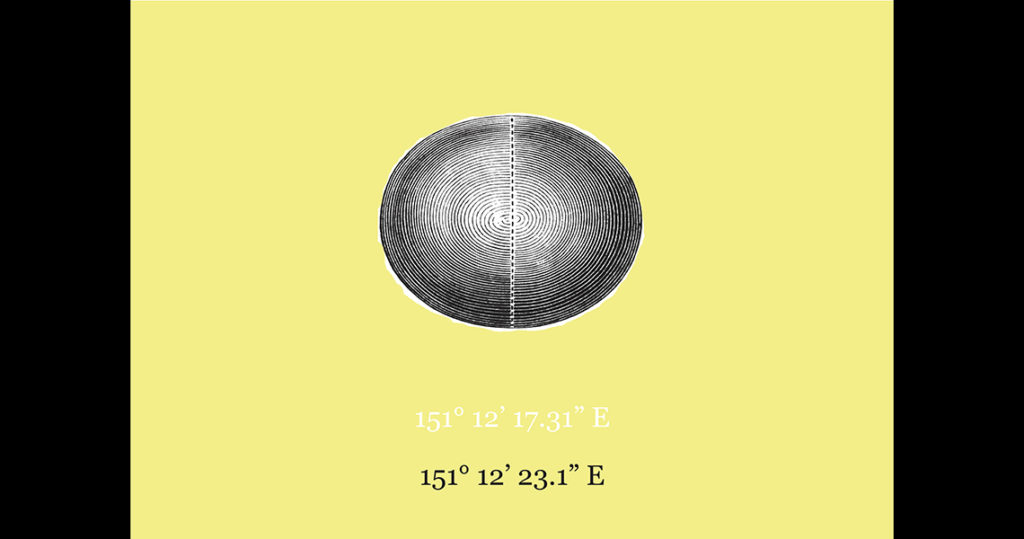 Cross the road. Just past the sign for number 1 Margaret Street (in a post-modern paradise) on the wall behind the giant grey slab, is Station 9.

While Sydney’s time service was inaugurated upon the establishment of the Observatory, and the first drop of the Time Ball on 5 June 1858, the quality of its instrumentation cast doubts over the precision of these measures. During his first two years as founding director of Sydney Observatory, Reverend William Scott completed all of his measures using a transit telescope made by Edward Troughton (1800–1821). Prior to the instrument’s arrival at Sydney Observatory, it had been in use at Parramatta Observatory until 1835. Poor Rev. Scott wrote that its defects ‘destroyed all confidence in the results’ (1859: 295), and that he was forced to assume an average across numerous star transits to provide any kind of close approximation of the time.

Even more crucial for our story is the fact that this same telescope served as the principal device to establish the Observatory’s first measure of its longitude – a figure, as we saw on the poster at Station 7, that seemed to not only alter but to change like ocean tides in spring. But this measure was nonetheless foundational for the initial survey of New South Wales, as maps and land titles were issued by the colonial government based on this data.

In 1859, the Jones Transit Circle, another instrument from Parramatta, finally returned from being repaired in London. A unique cross between a mural circle and a transit instrument, Scott used it to make further observations in 1860 and 1861, which he combined with the former values to establish yet another measure for Sydney’s meridian. This new meridian was eventually thrown into doubt by his successor Henry Russell.

Despite its flaws, the Jones Transit Circle served the Observatory for the next 17 years, until the current Troughton and Simms telescope was installed in 1877 (Figure 2), which ultimately provided more trustworthy positions of stars for the trigonometrical survey and for the apportioning of colonial land claims for New South Wales. The Jones Transit Circle was sadly lost in the early 20th century, but its sandstone piers can still be seen today under a fig tree in the front yard of the Observatory.

While for the average citizen, the civil hour is not so crucial – a lunch that starts a few seconds past 1pm is not going to make you any hungrier – the impact of errors in the determination of longitude made serious impacts on the expansion and mapping of colonial territories.

According to Government Astronomer of Victoria of the time, Italian-born Pietro Paolo Giovanni Ernesto Baracchi, both Sydney and Melbourne Observatories remained the fundamental meridians of Australia, up until the year 1883. However, numerous problems persisted due to reliance on figures, let alone presumptions about time that were never viable in the first place.

One such story of the futility of imposing empirical time on the ‘new world’ arrived across the Tasman from New Zealand’s Wellington Colonial Observatory, which depended on Sydney as the prime meridian for all of its own determinations. As noted in 1903 by Wellington’s transit observer, Thomas King, they were frequently obliged to correct their longitude distance because it was based on Sydney’s erroneous measures. King however stated that ‘it was possible to arrive at a value for Wellington Observatory derived from the Sydney longitude corrected on the basis of the Melbourne longitude’ – all of which seems a very elaborate way to know the time and distance back to Greenwich! And who came up with this idea to define the world based on a single meridian line in the first place?

To know the shape, size, and orientation in space of the Earth has been a long and sometimes hotly contested quest. While different cultural and religious belief systems widely subscribed to the notion of a flat Earth and of a geocentric universe, Ancient Greek philosophers were the first to theorise otherwise. The Greek scholar Eratosthenes (276–195 BCE) even had a method to estimate the Earth’s circumference that was quite accurate for the time, although no one knows how he actually did it.

By the late Middle Ages, the first of these two myths was no longer widely held in Europe. Even earlier, during the Middle Ages, a number of Islamic scholars and astronomers had advanced the idea of a spherical planet in motion around the Sun. But conflicting scientific theories about the solar system and planetary motion provoked intense religious and political dispute (including persecutions and executions) around the world right up to the end of the 18th century.

As scientific methods and instruments permitted more precise calculations through the 17th and 18th centuries, it became apparent that the Earth had a ‘figure’ – that it was not an evenly proportioned sphere, but was rather a spheroid (a sphere squished at the two poles) as Newton defined it, although British and French scientists argued about which way this egg was oriented!

Known today as geodesy, studies to precisely measure and define the planet do not in essence seek to dominate the Earth, however those with the most advanced knowledge in this domain deployed geodesy to survey and lay claim to lands, as the coming Stations will reveal.