Come face-to-face with six ancient Egyptian mummies and use the latest technology, including fully accessible interactive screens in the exhibition, to discover what lies beneath the wrappings and unlock the mummies’ hidden secrets. 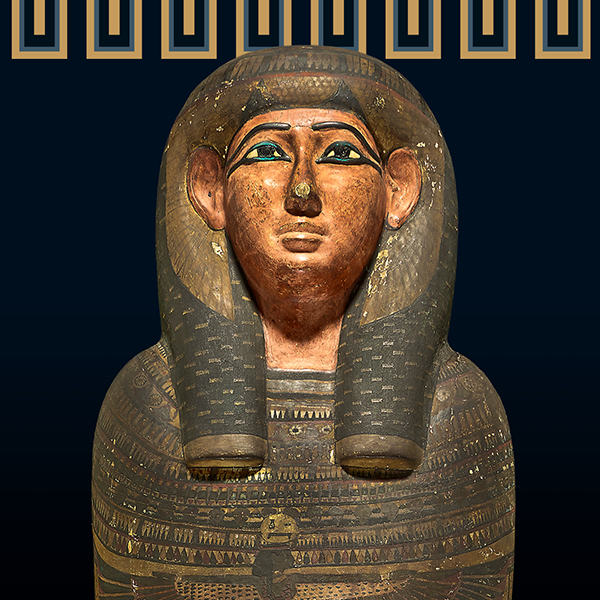 The name Nestawedjat is inscribed in hieroglyphs on each coffin and, as with most ancient Egyptian names, it has a meaning: ‘The one who belongs to the wedjat eye’. Also known as the Eye of Horus, the wedjat was a symbol of protection and healing.

Her title, ‘Lady of the House’, indicates that Nestawedjat was a married woman. The style and the quality of her coffins suggest that she came from Thebes (modern Luxor), a major religious centre in ancient Egypt. She belonged to a wealthy family. This is confirmed by her carefully mummified body, which provides an excellent example of ancient Egyptian mummification. 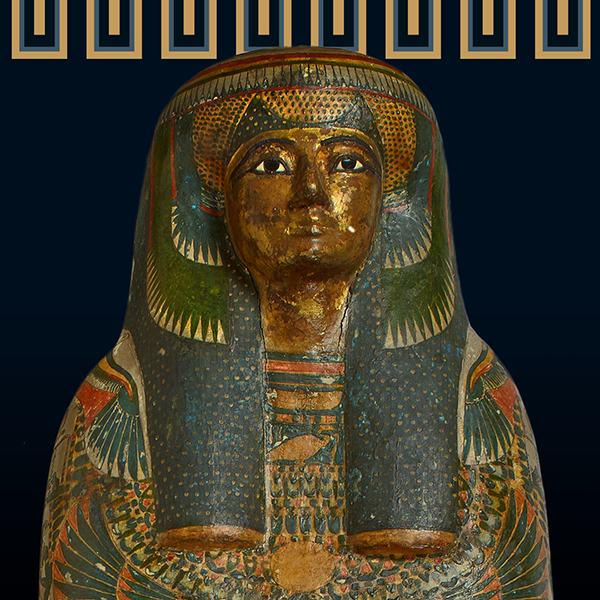 Inscriptions on her case identify Tamut as the daughter of Khonsumose, a priest of the god Amun, king of the gods. As members of a high-status family, Tamut and her father would have taken part in rituals in the temple of Karnak, the most important religious complex at Thebes (modern Luxor).

Tamut’s mummy illustrates how preservation of the body was only one element of the ancient Egyptian response to death. The CT scans show that many amulets and other ritual trappings were placed on her body under the wrappings. They were believed to have magical powers that would protect the deceased and help her to gain immortality. The clarity of the scans allows us to identify most of the amulets by their shapes. CT data also tells us which materials they were made from. 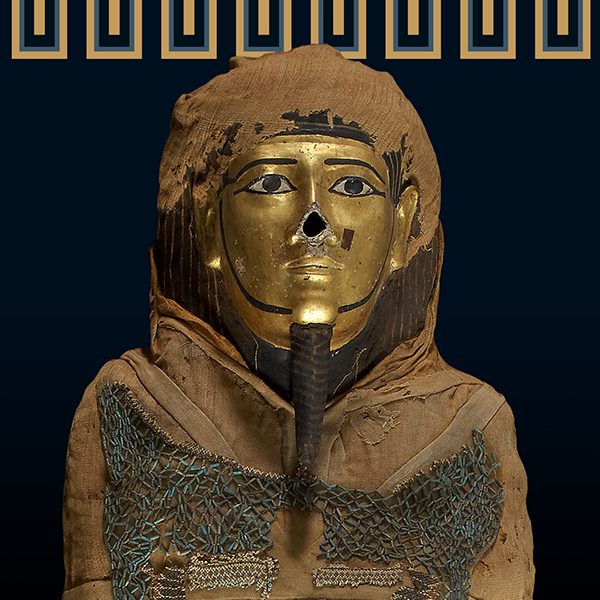 Irthorru lived in the town of Akhmim, situated about 200 km north of Thebes (modern Luxor). The inscriptions on his finely decorated coffin tell us his name and role – like many of his relatives, Irthorru was a priest. Serving several gods, he probably divided his time between different temples, including that of the fertility god Min whose cult flourished at Akhmim.

Irthorru’s body has been carefully mummified and several amulets, such as a wedjat eye on the back of his hand, were placed on his body to protect him and ensure rebirth in the afterlife. The gilded mask, an unusual feature for the period, gave him a perfect face for eternity – gold was thought to symbolise the skin of the gods. Typically masks covered the whole head but recent CT scans reveal that Irthorru’s mask only covers his face. A linen shroud cleverly hides the rest of his head. 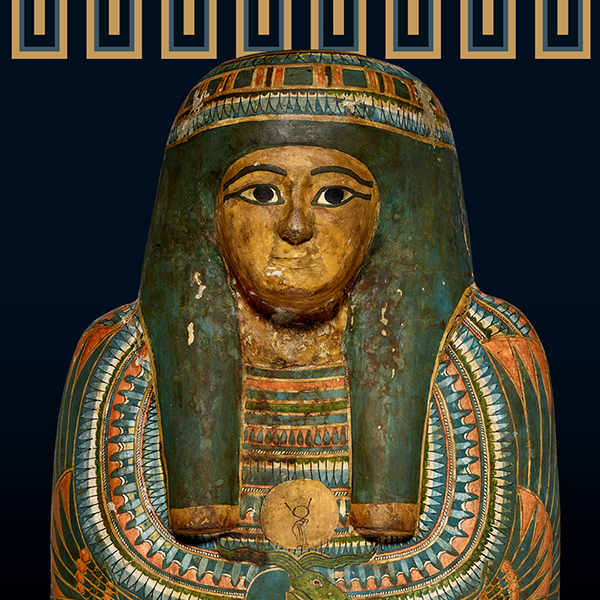 Although we do not know her name, the inscription on this woman’s cartonnage case tells us that she was a priestess – more precisely a Singer of the Interior of Amun. She lived in Thebes around 800 BC and probably worked at the temple of Karnak. We have no record of her personal life, but being a priestess would not have prevented her from marrying. CT scans show that she was probably between 35 and 49 years old when she died and suffered from various dental problems. One of her front teeth is missing.

Priestesses and temple singers are usually portrayed on their funerary equipment as young and wearing delicate jewellery. A few amulets were found inside this woman’s abdomen and numerous small metal – probably gold – pellets were scattered on top of her body. Her short hair suggests that she might have worn a wig for special occasions, possibly complemented with lavish jewellery.

A young child from the Roman Period 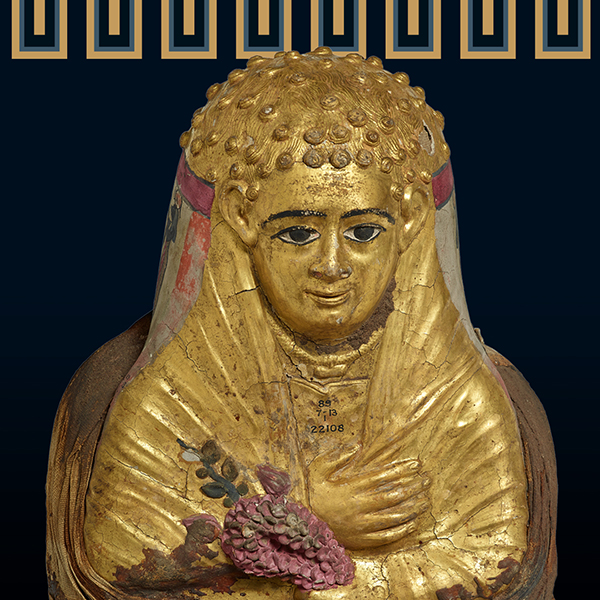 Estimated height: Position of body does not allow measurement

In ancient Egypt few children appear to have been mummified. However, during the Roman period the practice seems to have increased and many examples have been uncovered at the cemetery at Hawara. Located at the entrance to the Fayum oasis, Hawara was intensively used during the periods of Greek and Roman rule as a cemetery for the inhabitants of the nearby city of Arsinoe. The rudimentary graves sometimes contain several bodies. This young boy was discovered with other mummies, including a woman and two children.

CT scans confirm that the boy was around two years old when he died. His spine and ribs were damaged, possibly during mummification, but his body was wrapped with great care in many layers of bandages. His gilded and finely decorated cartonnage mask suggests that he came from an elite family. On the lower part of his body the cover depicts traditional scenes, such as a priest – or maybe the boy himself – performing rituals and presenting offerings to the gods.

A young man from Roman Egypt 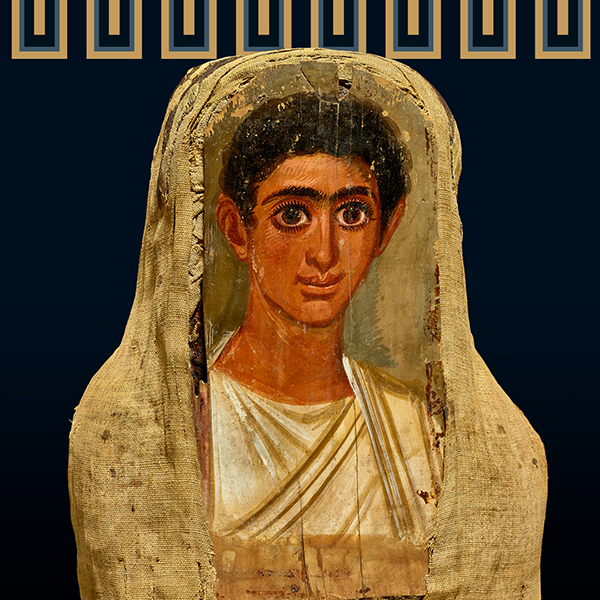 Mummification continued to be practised when Roman rulers took over Egypt in 30 BC. However, the techniques and styles used in mummification evolved during this period. One major innovation was the use of wooden panels depicting the deceased, known as ‘mummy portraits’. This mummy of a man with his lifelike portrait was among the first mummies with such an image to reach Europe.

The picture shows a young man with dark curly hair, thick eyebrows and wide eyes. He is beardless, indicating youth, and CT scans have confirmed that he was between 17 and 20 years old when he died. They also revealed that he was overweight, in contrast to the slim face shown in the portrait. Tooth decay is clearly visible on the scans, evidence perhaps of a diet rich in sugar and starchy foods.

All images © Trustees of the British Museum.