The Powerhouse acknowledges the Traditional Custodians of the ancestral homelands upon which our museums are situated. We respect their Elders, past, present and future and recognise their continuous connection to Country.
Sydney Observatory

A transit of Venus occurs when Venus is observed to move across the face of the Sun. This astronomical event has particular significance for Sydney Observatory as our historic Schroeder telescope was acquired to view the 1874 transit of Venus.

When do transits of Venus happen?

Transits of Venus are among the rarest of predictable astronomical phenomena. They occur in a pattern that generally repeats every 243 years, with pairs of transits eight years apart separated by long gaps of over 100 years.

After the transit of 1874, for which the Sydney Observatory’s Schroeder telescope was purchased, another occurred in 1882.

We were lucky enough to experience the event at Sydney Observatory in both 2004 and in 2012 and it was truly spectacular. The suspense of intermittent clouds and rain made the views of Sun and Venus even more special. There won’t be another transit until 2117.

Timeline of transits of Venus

It was only after Galileo Galilei invented the telescope in 1609 that viewing a transit of Venus became possible. While calculating astronomical events for 1629-1630, the brilliant mathematician and scientist, Johannes Kepler, discovered that both Mercury and Venus were likely to cross in front of the Sun.

How to view a transit of Venus?

Do not look at the Sun either directly or through a telescope or binoculars. To do so risks serious eye damage or blindness.

It is possible to safely watch a transit if you use a small telescope or a pair of binoculars to look at a projection of the Sun instead of directly at the Sun.

For safety, remove the finderscope from the telescope first. Then use the instrument to project an image as shown in the diagram below. 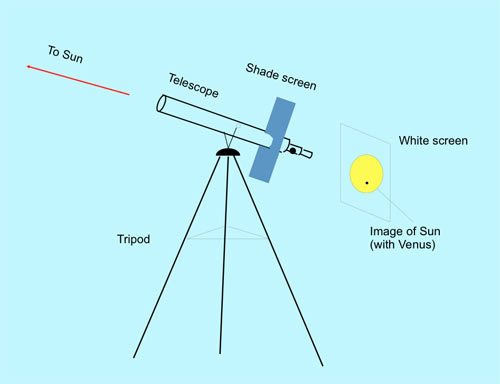 Never leave the telescope unattended and ensure that children are supervised at all times. Viewing the projected image is quite safe but looking through the telescope or binoculars will cause almost instant blindness.

Turn your back to the Sun and aim the telescope towards it using the shadow of the telescope to guide you. Focus its image onto a white card held about 20 cm behind the eyepiece. A transiting planet will appear as a black spot within the Sun’s width.

For a direct and safe view of the Sun, a pair of eclipse glasses fitted with solar filters can be used instead.

Transit of Venus at Sydney Observatory

Sydney Observatory was the ideal place from which to witness the historic transit of Venus on 6 June 2012. We were equipped with solar telescopes and solar binoculars through which it was safe to look at the Sun. Our astronomers were on hand to help visitors get the most from this ‘last chance in a lifetime’ event.

The 2012 transit was visible from Sydney when the sky was clear for most of the transit from 8.16 am to 2.44 pm. On arrival, visitors received a pair of solar viewing glasses. Sydney Observatory had a number of telescopes outside the main observatory equipped for safe solar viewing and projection. First, Second, Third and Fourth contact were also shown on a screen and as a projection.

You can read more about the transit of Venus at Sydney Observatory in our series of blog posts.

You can purchase Dr Nick Lomb’s book or ebook Transit of Venus: 1631 to the Present in our online bookshop.