We hold events at Sydney Observatory so you can view solar and lunar eclipses using our telescopes. For solar eclipses, we have solar filters on binoculars and telescopes as well as special eclipse glasses for you to use. We also live stream our view of eclipses.

Keep an eye on the What’s On section of our website for event details.

What is a solar eclipse?

A solar eclipse occurs when the Moon, in the course of its orbit around the Earth, casts a shadow on to the Earth. When viewed from the surface of the Earth, the Moon blocks all or part of the Sun from view. Only by observing from within the cone-shaped umbra of the Moon’s shadow can we see the Sun’s disc completely obscured. From within the lighter penumbra at least part of the Sun remains visible and we witness only a partial eclipse.

Although a solar eclipse of some kind occurs somewhere on Earth at least twice each year, in only some of these events does the Moon completely cover the Sun. Usually the umbra misses the Earth altogether, passing ‘above’ or ‘below’ our planet. Even when the umbra does intersect the Earth, we are very close to its end where the width of the shadow is very small. So as the Moon’s shadow moves from west to east across the Earth’s surface due to the orbital motion of the Moon, it traces out a quite narrow path, at most about 270 km wide.

When is the next total solar eclipse?

The next total solar eclipse viewable from Sydney will be at 2pm on 22 July 2028. The Moon will fully cover the Sun for 3 minutes and 50 seconds.

This event is rarely visible from a large city like Sydney because large cities are less likely to be in the direct line of the eclipse. This is simply because there are many more smaller towns than there are larger cities.

What is a lunar eclipse? 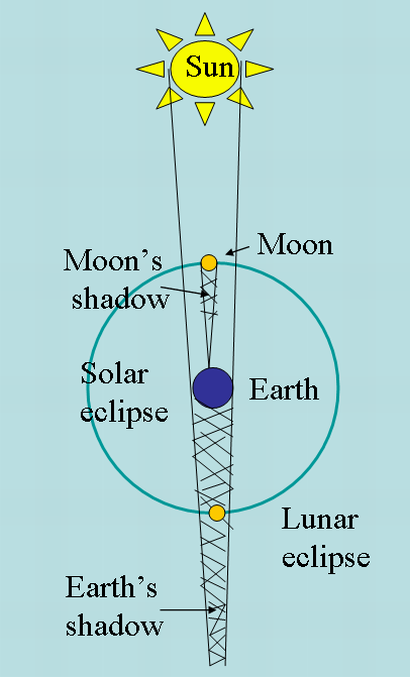 When is the next lunar eclipse?

On average there is an eclipse of the Moon every eight months, with a little under half of these total. The actual number of lunar eclipses in a year can range from none to a maximum of three. A total eclipse of the Moon is visible from Australia on average every 2.8 years.

Why does the Moon appear red during a total lunar eclipse?

The Moon will appear red during totality because red light from the Sun is bent by the Earth’s atmosphere. The light is red as other colours such as blue are scattered in all directions, just the same as at sunset.

Whether the Moon will go red and how dark it will appear during an eclipse depends on atmospheric conditions at the time. This post about the 2007 total lunar eclipse will give you some idea of what we can hope to see during a lunar eclipse.