Back to ‘Shape 2017 – Showcase of Technology Products’

People installing and uninstalling nesting boxes climb an unstable ladder carrying the large, heavy box in one hand and tools in the other. Using engineering principles, Matilda designed a system where no climbing is necessary. Telescopic poles and a pulley system lift the nesting box, and a clamp operated from the ground attaches it to the tree. Boxes can be installed up to 7 metres high, exceeding current standards of 3 metres.

‘There were no existing ideas to base my prototype on so I had to develop the concepts before producing ideas. I had to rely solely on my imagination.’

THE TREE: An Environmental Infographic

Nicholas expanded his existing skillset in creating an infographic that combines 2D and 3D animation, modelling, video and sound techniques to convey a strong message about the value of trees on Earth and the devastating effects humans have had on forests. He composed an original soundtrack and used vector graphics and a 3D modelling aesthetic to give the work a consistent theme and bind the various elements together.

‘After extensive research and planning, I saw this as an opportunity to experiment with creative and innovative tools, including aspects of 3D printing and virtual reality, as different forms of conveying information.’

For his music video Willow composed and produced an ‘80s-style disco song that is very loyal to its time period, capturing the overblown look of pop icons such as David Hasselhoff and the Bee Gees. The concept let him experiment and push the boundaries in every aspect of production: costuming, acting, the song and particularly visual effects.

‘I did a great deal of research into how special/visual effects were created in the ‘70s and ‘80s and I was surprised to learn just how primitive they were. This inspired me to limit my repertoire of effects to what was available then.’

‘I hand made and dyed the tassels with avocado skins, which are a natural, colour fast dye source. This experimentation was innovative and environmentally friendly as well as being interesting and exciting.’

Megan’s costume expresses her love for the countryside, and her fears for damage to the Liverpool Plains through mining. The back straps in earthy colours of red and brown convey possible damage to the land, the V-neck represents the expanse of the open cut pits, while the swimmer print conjures up the threatened aquifer. The raincoat back, curved like the food bowl, shows canola and wheat, and the contrasting strips of vinyl, reflective tape and binding directly refer to the safety jackets of miners.

‘I had to balance my inspiration with the constraints of designing and making a wearable garment.’

Mobile devices often run out of charge, so Sarah’s Solar Bag idea was born. Its wireless, solar-powered charging feature has efficient conversion rates and low charging times. An application monitors the device’s current charge and records energy use and creation over the past day, month and year. This constant flow of

information educates the user and promotes sustainability. A recurring graphic of a mountain unites the interior of the box, bag lining, business cards and posters.

‘Due to my love of Physics, the most enjoyable component was the wiring as I could apply my theoretical knowledge to a practical application.’ 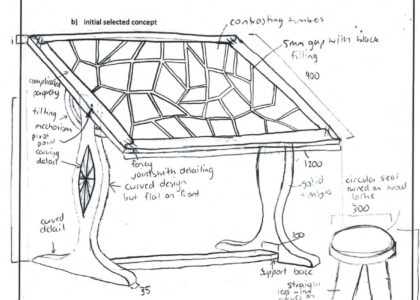