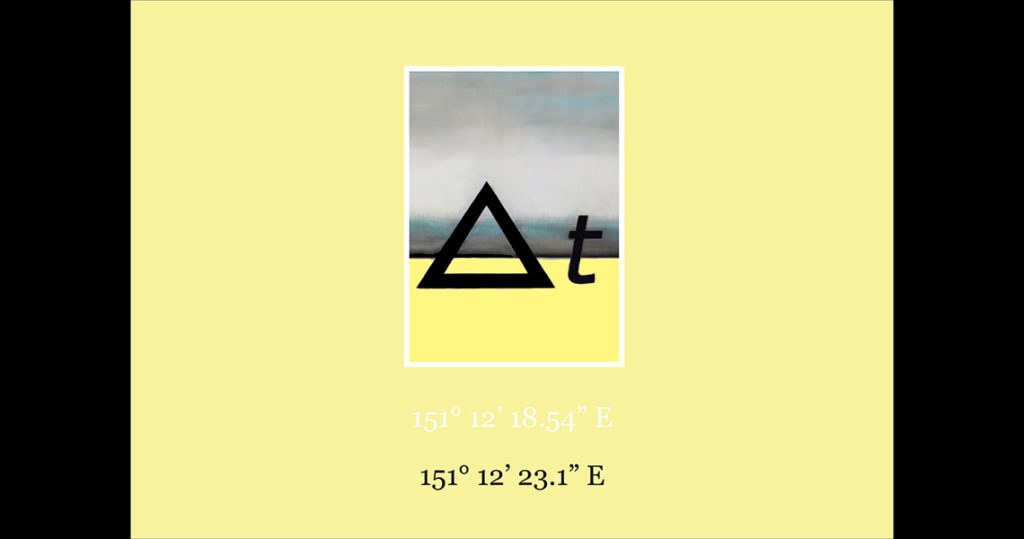 At the top of Druitt Lane, directly in front is an abandoned building, on the doors behind the one way street sign is Station 23.

Despite the misuse of surveillance by probably all governments worldwide and plenty of private corporations, in addition to the pollution of our ancient view of the sky, Global Navigational Satellite Systems have at least provided a holistic view of our planet and data on its changing nature over time, as well as impacts of the present human-caused climate crisis.

Satellite technologies, such as GRACE, have been harnessed for a whole range of research, including mapping of global sea levels, and to ascertain the shape and position of planetary poles, gravitational geometrics and its speed and angle of rotation. These technologies have provided data to reveal the scale of change taking place on our planet – in particular the impacts and evidence of increasing temperatures on its ecosystems, weather patterns, bodies of ice, and ocean levels. Although there are many factors in play and many ways to interpret the data over short and long timespans, even the most strident denier cannot avoid the scientific consensus that the planet has warmed at an unprecedented rate and level (and the primary driver is greenhouse gases produced by human activity), and that global mean sea levels are rising due to the large scale melting of glaciers and ice shelves.

What is not often publicised is that these changes are also affecting time. Since 2016, a number of the world’s most significant planetary observatory research centres (i.e. NASA, Paris Observatory) have published papers that make the link between large changes to the distribution of water around the Earth and patterns in the Earth’s speed of rotation, its spin axis and the position of this at the poles.

I first became interested in the relationship between time and ice around 2008. It began with an intuition that time was not only expressed in the melting of ice – as pure change, loss and irreversibility – but that the duality of loss and life itself was something that we had never really been able to embrace. This was also around the moment that I discovered Foucault’s pendulum – which not only demonstrates but embodies the gravitational rotation of the Earth. As an allegory of twofold status of time – which flows but can only travel in one direction into the future – a pendulum of ice seemed like the most perfect anti-monument of time. But when I made this sculpture back in 2012 and 2013, the aptness of the imagery had not yet dawned on me – because the Earth’s rotation speed varies in response to climatic and geological events.

Apart from illustrating entropy and that changes to matter cannot be reversed, the ice pendulum is a model of the Earth itself, one that very crudely demonstrates what happens to an object in motion when the distribution of mass is altered. In the example of the ice pendulum the water is lost, while on Earth the movement of water around the planet plays a fundamental physical role in its rotation.

For one, it is a known effect that the moon’s gravitational force –influences the movement of – the oceans around the Earth’s – it is the reason we have tides. Yet another effect occurs as the moon creates friction with the bulge of tidal water, which slows the precession of the Earth on its axis, and thus its speed of rotation. As large masses of frozen water held for millennia in glaciers and ice shelves have proceeded to melt at greater speed and scale, there have been studies analysing the impact of this increase in ocean water on tidal friction.

Two, our planet’s axis is not fixed but moves around the poles. Regarded as the ‘wobbling’ effect, there has been a distinct change in the axis since the year 2000, as it is moving at a much faster rate and in a totally new direction.This change affects time measurements from both Earth-observing satellites and for observatories on the ground.

Three, the redistribution of mass from the poles toward the equator alters how fast the planet spins. Geophysicist Jerry Mitrovica has published extensively on the geographic variation in sea level over many époques through to today. Mitrovica explains, because ‘glaciers are mostly near the axis’ of the Earth (its north and south poles) while the world’s oceans are generally gathered around the centre (toward the equator) – when glaciers melt there is a ‘mass flux toward the equator’ and this is ‘going to slow the earth down’.

There are many reasons why the Earth’s rate of rotation varies yet the physics of this is simple: when an object spins on an axis, the farther its weight is distributed away from the core, the slower it will spin – known as angular momentum – which as Mitrovica points out is easily visible when the pirouette of an ice skater decelerates because of outstretched arms.

Even though you may not notice it, the Earth is turning more slowly, making the mean solar day ever so slightly longer. This difference is of course only relative to clocks – specifically to the Coordinated Universal Time, or UTC, the primary time standard by which the world regulates clocks and time. As the successor to Greenwich Mean Time (GMT), UTC is calibrated within a second a mean solar time at Greenwich’s 0° longitude.

The drift of time is not linear and the difference is small – less than a second per year or ~2.3 milliseconds per day per calendar year. But this still needs to be accounted for over time. Hence, the introduction of the leap second, which has saved us from a gap of more than 30 seconds since it commenced in 1972, regulated by International Earth Rotation Service (IERS) at the Observatory of Paris.

This gap is of course still widening despite the leap second, which only corrects atomic clocks, this is called Delta Time. Written as ΔT or Delta T, this is the time difference obtained by subtracting Universal Time (UT) from Terrestrial Time (TT): ΔT=TT−UT. With this we can now decode the symbol in Station 23’s poster, which was taken from a photoluminescent painting titled Delta Time that I made in 2009.

In the 1850s, mean time in each of the colonial settlements of Australia was always local – as the notion and the technology of one universal time had yet to be imagined. Because of this, regulator clocks were by proxy connected to the Sydney chronograph, one running on sidereal time – here on the clock face of the Hardy regulator in figure 2. Sidereal time is based on the tracking of distant, apparently fixed, stars (allowing the anticipation of their return) and this provided the direct data for the chronograph pin pricks that we learned about at Station 8.

Mean time, on the other hand, is the given time of a solar day averaged to take into account the variations of seasons, however other effects, such as tides and axial perturbations, could only be corrected by stellar observations in those days. Readings from the chronograph allowed mean time to be adjusted according to these constant fluctuations, and for everyone in the colony of Sydney to at least share a reasonably common hour.

But no clock has ever been able to rule out this change entirely. Clocks over their long history have moreover been constructed based on different philosophies of how to count time – with the notable examples shown in figures 3 and 4, each with contrasting enduring effect.

I feel like I am waiting around like this bloke in his nice red shoes while Delta Time is drifting apart from me. Even though I’d love to make that wish, I don’t have the red heels to travel back in space-time and recuperate my lost seconds. Time is inexorable – always going forward. All the same, I have to admit, I’m ruled by the clock. But I have no idea how this came to be. I’ve begun to realise, to quote Melbourne writer Giordano Nanni, that I’m living in a ‘matrix of hours, minutes and seconds’ that have been ‘computed and calculated at the geographic heart of the Empire’ (2011: 6).

One thing I did find out from this Meridian Walk is that New South Wales only adopted the Universal Time System as late as 1895. And since that day, Sydney’s meridian has been 10 hours ahead of Greenwich – as it still is today – more or less!