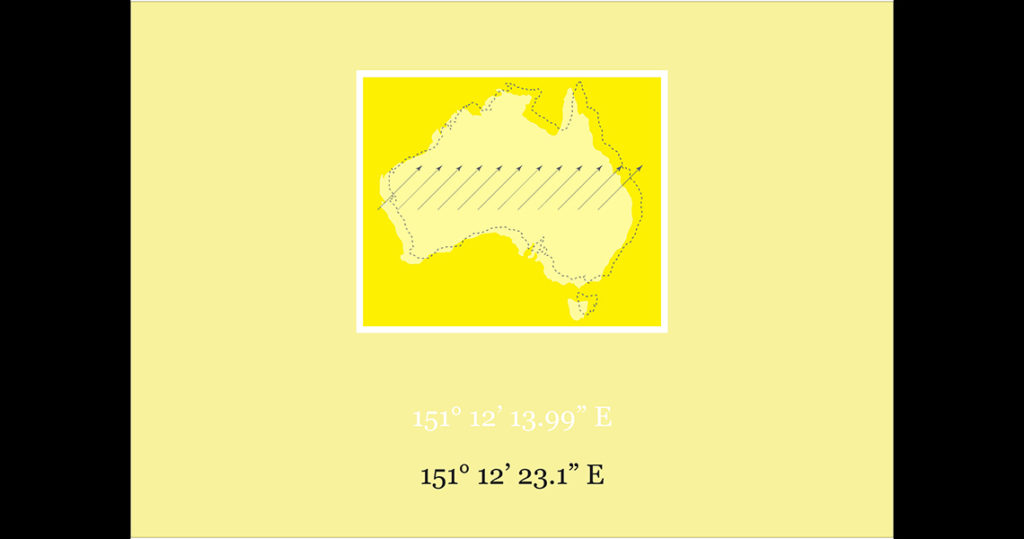 Now, turn right into Market Street, staying to the left of the footbridge. Approach the corner of Sussex Street, then turn around 180 degrees to find Station 21 on the footbridge pillar.

The contradiction of the empirical premise that all of nature can be claimed and controlled is evident today in the very current problem of making maps coordinate with the global positioning system (GPS). We all love knowing where we’re going on our smartphones, however a disjunction has emerged.

Static coordinates (or datums) are fixed to the tectonic plate, located to a point on the ground that does not change as the plate moves. GPS, on the other hand, is based on precise time and orbital data coordinated by satellites rotating the Earth, data that is converted to coordinates on the ground via geolocated tracking stations. GPS, however cannot trace land boundaries that constantly shift due to changes in the Earth’s form.

Australia has been a particular instance of this dilemma, as it is on one of the most rapidly changing tectonic plates in the world, drifting about 7cm per year to the north-east. Australia is facing map misalignment challenges, as the GPS positioning deviates noticeably from static national datum, updated in 1994 and now in 2020, resulting in a misalignment of 1.8 metres – the distance the plate has travelled since 1994. This increasing uncertainty has threatened the legal traceability of the datum in Australia.

Despite the implementation of the Geocentric Datum of Australia 2020 or GDA2020 (Janssen 2017) on 1 January 2020 as Australia’s new National Datum, questions remain for the alignment of surface positions with maps that are coordinated with respect to the centre of the Earth and thus the changing position of coordinates over time. For this reason, the New South Wales government has expressed concerns, calling for ‘truth in labelling’ as the gap widens (DCS Spatial Services 2019).

What does this mean for the absolute measure of space and time?