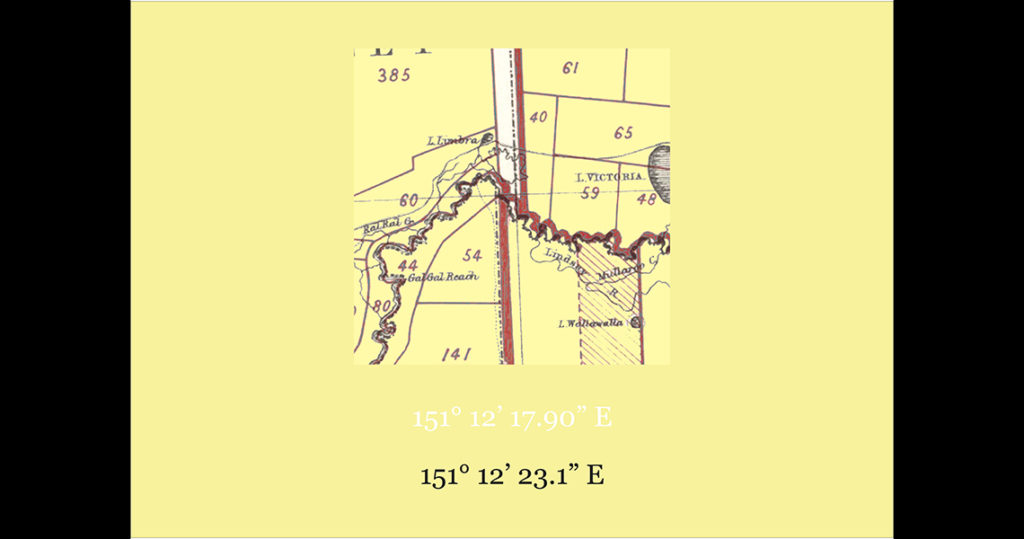 At the corner, take a hard left and right there on the wall in front of City Mart is Station 20.

Despite all of these instruments and the presumption of accuracy, from the first years that European methods were introduced to survey colonial Australia errors plagued the process, and corruption was rife. A circular from Surveyor General Mitchell sent to all New South Wales Surveyors and Assistant Surveyors in the field, dated 1st January 1836, began that year on a sour note!

Having cause to apprehend that the marking and measuring of the portions of land applied for as purchases are conducted by some of the Surveyors in a very loose, inaccurate and unsatisfactory manner, particularly by their neglecting to trace the course of the Frontage Streams and to mark and ascertain the lengths of the lines dividing conterminous portions – I have to point out to you that – although even in the measurement of a Grant (a gift from the Crown) such looseness could scarcely be tolerated.

In conclusion I may observe that great inconvenience is experienced by the Public and by the department for the sake of having the lands actually measured as insisted on by the Governor and that unless this is done the sales might just as well be carried on, and the areas calculated, from the General Surveys.

I have the honour to be. etc.
Signed, T. Mitchell.

As we have seen, as permanent references, blazed trees were extremely vulnerable to destruction. Added to incompetence during early surveys, the contest between squatters and free settlers led moreover to corruption (Spooner 2005), and settlers were known to re-blaze a line of trees to alter their boundary (Spooner 2019: 3), or purchase small allotments in order to thwart access to water or viable expanses of land.

As a result of this legacy, the Australian landscape today is rarely aligned with a meridian at all. Instead it’s an obvious patchwork, with almost serpentine boundaries, typical of maps like figure 2.

In essence, colonised Australia is a jigsaw puzzle of land boundaries based on unsystematic land allocations, which, as Spooner (2019: 3) explains, when rural areas were eventually ‘surveyed, they couldn’t line things up using trig stations, leading to roads being misaligned and having to dog leg to meet up’.

Probably the most famous instance of such misalignment is the 3.6 km dog’s leg on the South Australian border of Victoria – our clue for Station 20’s poster. And there is not even any agreement on how it happened. As one story goes, two groups of surveyors each undertook their measures based on two versions of the Prime Meridian at Greenwich. While the Bradley Meridian was the prime reference until 31 December, 1850, from 4 January 1851 the Airy became the Prime Meridian, which entailed a shift of eight metres at the latitude of Greenwich.

On the other hand, the discrepancy could have arisen from the errors in the determination of the Meridian of Sydney at Fort Macquarie. As I recently noted in a comment on Station 4, when Charles Tyers determined the 141th meridian for the border between Victoria and South Australia there was an error in the determination of longitude from Fort Macquarie of 0° 02’ 54”. This error resulted in a discrepancy of 3 kilometres on the border, and was the source of a long-running legal dispute from 1849 to 1911, until finally the Australian High Court ruled in favour of South Australia, and a dog’s leg that is still shown on maps today – and the poster for this station.

Letters from the Surveyor General to Surveyors. Archives Reference 4/5425. https://www.records.nsw.gov.au/archives/collections-and-research/guides-and-indexes/surveyor-general-guide