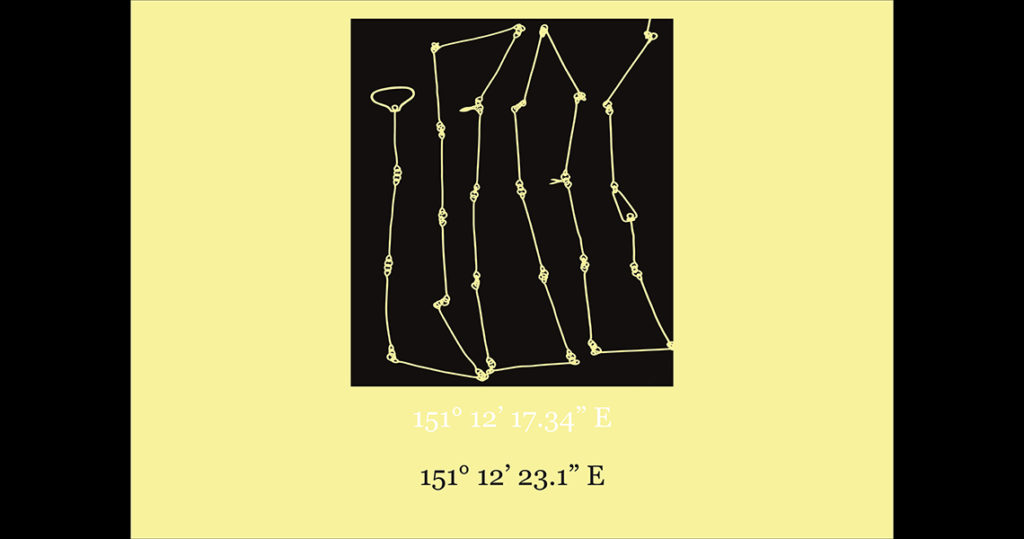 Further along on Kent Street pass by some rough sandstone walls, another archway then Vicolo Café, just beyond that, in the second arch is Station 19.

The science of spatial measurement (called metrology) has required increasingly precise correlation between instruments, units and standards. The paradox of territorial claims and the need for accurate and truthful measures is nowhere more apparent than in colonial New South Wales.

As in many European and colonial nations during the 18th and 19th centuries, one of the primary tools for measuring terrain on the ground was the Gunter’s chain. Invented in the early 17th century by British mathematician Edmund Gunter, the chain comprises 100 straight pieces of metal wire, which are looped together end to end, with handles at either end. A single ‘chain’ measures 66 feet (or about 20 metres).

The method (usually done with an assistant) involves pinning down the chain at the starting point and laying it straight out toward a stake (the ranging rod), and repeating this if the length is greater than one chain, finally counting these and any ‘links’ as a fraction of the chain. In the gauges of the day, ten chains was a furlong, while 80 chains made a statute mile – a mile being 5,280 feet, as it was designated under a statute of 1593 in an act of British Parliament by Royal Decree of Queen Elizabeth I.

Gunter’s chains were so ubiquitous in British colonies that quite a number have been preserved. The Museum of Applied Arts and Sciences has a range of surveyor’s equipment in its collection, among them a surveyor’s or Gunter’s chain made by Chesterman, Sheffield, England, date unknown.

The Museum of New Zealand Te Papa Tongarewa has the example shown in figure 1, and its curatorial analysis of this object, states that the colonisers’ precision in ‘technology matched their increasingly legalistic understanding of what it was to own a piece of land’ … but, when more expansive land seizure became a reality, surveyors followed the military, one form of retaliation for the Māori was to confiscate surveyors’ chains and theodolites.

We have already seen Hoddle’s famous Melbourne city grid back at Station 4. While these straight lines may seem to promote order, Hoddle created the map of Melbourne in 1837, without having ever visited the site. Still worse, or so the story goes, ‘he ignored the existing physical landscape and the homes of people already living in the settlement’ (State Library of Victoria, n.d.). Hoddle was blamed even for Melbourne’s terrible weather – when floods ran like rivers down Collins Street – as if that has ever changed!

The Hoddle anecdotes don’t end there: the notoriously bombastic Thomas Mitchell riled the Governor ‘for recommending Hoddle as deputy surveyor general’, Mitchell in true style maintaining that poor Hoddle ‘can scarcely spell … this man can only be employed as he has always been, at the chain’ on the ground with the Gunter as it was then (Tipping 1966).

Occupiers faced far greater problems for their empirical territorial claims than the petty rivalry of government surveyors. Units of measurement used in land surveying needed to be exact and to be enforced. But, Marshall (2014) writes, for ‘about the first 100 years or so, the legislature of New South Wales showed complete indifference’ to any defined standards. A standard was a legally defined unit that enabled accuracy in the measurement of land boundaries.

While precise and legally enforceable weights and measures had been a critical preoccupation of both British and French empires for several centuries, the first Australian legislation on weights and measures was only introduced in 1832 with the New South Wales Act, which required surveyors to adhere to the British system of standardised measurements.

The first problem the government faced was that the British Imperial ‘standards’ were based on physical objects – as we saw in the case of the French metre in Station 10 – which if copied rather than editioned tended to lose precision. The second issue was that surveyors needed to match up their primary field tool – the Gunter’s chain – against the standard, as the chains tended to be warped with use. As such it was necessary to provide access to a ‘standard baseline’, the first known instance for New South Wales being carved into the flagstones of Sydney’s Lands and Survey Office in 1832.

In 1832, as it happens, the original yard and the pound standards from 1496 were held in vaults at Westminster, but when the Houses of Parliament were destroyed by fire in 1834, so were the originals. It took more than 10 years to produce a new set. Finally, in 1845, forty bars for the yard were cast; one selected as the primary of the Imperial Standard Yard. The ‘next best’ copies were duly dispatched in 1845 to major cities in Britain and its colonies; one each of these to the New South Wales and Victorian governments to serve as the primary colonial standard.

A brief aside, which I hope you’ll excuse, to admire the splendour of the Lands Department building, where it is plain to see the importance of the wealth being collected from property sales in this period.

The location of the building is moreover apt, positioned as it is in front of the ‘Obelisk of Distances’ in Macquarie Place. Erected by convicts in 1818, based on the design of the convict architect Francis Greenway, the obelisk served as the ‘zero’ point to measured roads out of Sydney into the expanding territory of the Colony – a meridian of the crudest kind.

After the old Lands office was demolished in 1888, the public standard was not replaced in the newer Lands Department building, which was completed in 1892. There seems to be some interval during which no standard was made available to surveyors. But the standard bars themselves offer yet another fascinating foray into the contradictions of implementing empirical systems in practice.

A number of standards were sent to Australia during the period. In December 1858, for instance, according to Marshall (2014: 172) the ‘10-foot Geodetic Standard Bar [named] Ordnance Intermediate No. 4 (OI4) was sent to Sydney for the Government of New South Wales in and a second similar bar, with no distinguishing mark or inscription but made by Troughton and Simms in 1881, was sent to the Colony in March 1884’.

From what I have been able to ascertain, a baseline was laid down at the Observatory, which Marshall (2014: 174) confirms: ‘Standards of 66 feet and 100 feet with stone terminals carrying the marks showing the distances had been laid down at Sydney Observatory around 1880 following the destruction of the one chain length in the pavement at the front of the Old Lands Office’. But, as Bayliss (1957) notes, ‘the observatory standards were apparently damaged by rough usage and were later found to be 0.04 inch short’.

The Powerhouse Museum, still possesses two standard bars, and there is every reason, Marshall argues, to believe that these are the standards from 1858 and 1881.

At some point, finally, a set of standards were installed in the ground floor corridor of the Lands Department building, embedded in black and white marble measuring one chain long… hopefully these can be found today.

Ian H. Marshall. 2014. ‘For Good Measure: The Story of the Adoption of Linear