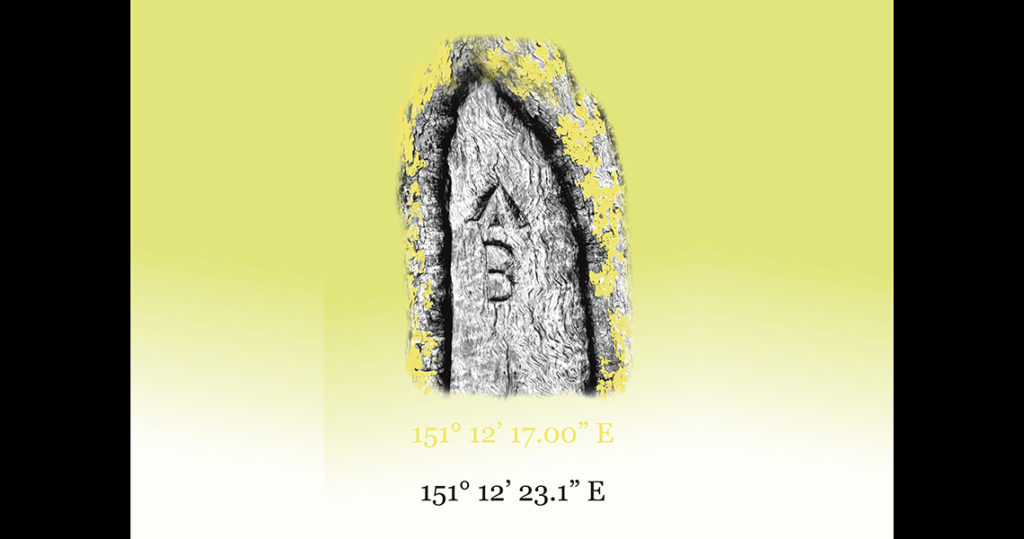 Cross over King then onto Kent Street but stay on your left, just a couple of metres further are two doors and Station 17.

Now for some technical details on the marking of boundary trees.

By 1830, apparently, about ‘3.5 million acres of land had been alienated in New South Wales’ (Marshall 2006: 3). I’d never heard the term ‘alienated’ before but with settler colonialism in New South Wales, the mass transfer of titles from being crown or public entailed a novel interpretation of British ‘common law’ to make lands available for sale to settlers – a transfer that would make the land ‘alienable’ as opposed to ‘inalienable’ or non-transferrable.

This history reveals that act of dispossessing the First Peoples of Australia of their land was not simply a matter of driving inhabitants off the land (in direct violence, child removal, imprisonment) but also required impossible applications of British property law that contravene the inalienable human right to live on the lands of your ancestors. The result Australians have to live with is the untenable situation in which the actuality of Aboriginal sovereignty is repudiated – yet that could one day be resolved as envisaged in the ‘Uluru Statement from the Heart’ (2017).

For colonists, the task was not however easy! The subdivision of New South Wales into 141 counties was completed by 1848 (divisions that remain today), however there was an immense gap in the work required to properly measure and map these boundaries. Systematic markings on the landscape were needed to provide permanent evidence of survey (NSW Land Registry Services 2013). To this end, guidelines were provided by the Surveyor General, some of which were conventions from England, others adapted to the specificity of the Australian colonial situation.

An 1853 circular from Surveyor General’s Office, for example, included clear technical guidelines to surveyors for marking survey references trees (Marshall 2001: 19). The illustrations shown here were printed by the NSW Department of Lands in countless versions between the mid-1800s at least as late as 1914, and we can only presume that the codes remained intact as long as trees were being scarred in this way by colonial surveyors – which continued well into the mid-20th century.

The initial letters of the names of the Counties which shall be used for boundaries of the same placed over numerals in regular sequence for that survey. And if the allotments of which the tree forms the corner are numbered, such numbers should be cut deeply in the wood in the horseshoe mar, on the side of the tree facing the allotment to which such number applies.

For a general survey of the country, or in a survey made to connect any measured portions, where it extends over more than one mile, Roman numbers should be marked at the end of every mile, giving the distance from the starting point, as these numbers are of great service in taking up the survey at any future period.

All of these markers should have been made in reference to (or with bearing to) the nearest trig station, aligned with Sydney’s Meridian. Yet, as the government of New South Wales was yet to undertake a complete trigonometrical survey, until 1865 surveyors had to rely on the same method used for navigation at sea. Carrying a chronometer and frequent theodolite measurements to refer to the prime meridian were necessary. Scientific instruments were also rare until the late 1800s, and Mitchell was probably the first surveyor to put a theodolite to work in a major survey.