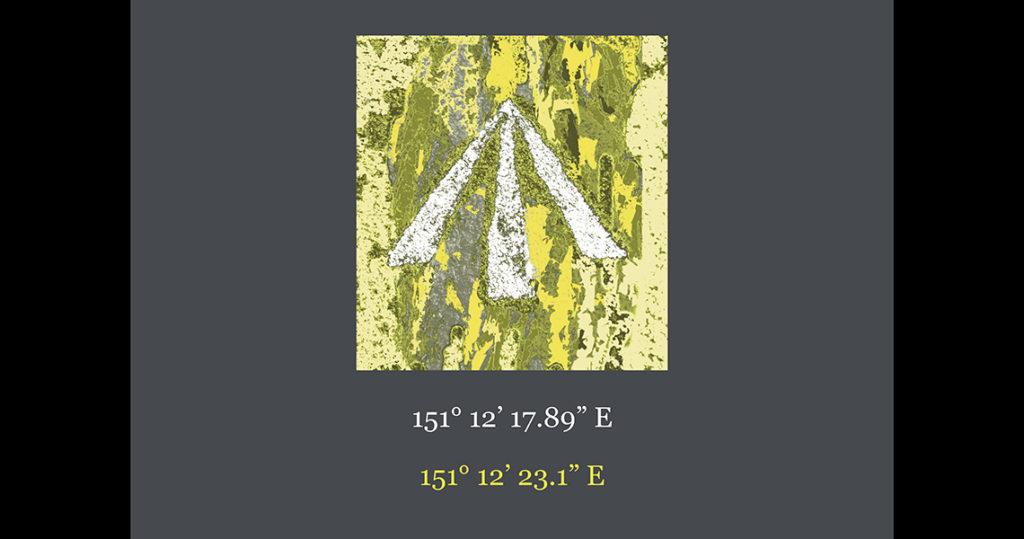 Sydney’s streets, as you probably noticed, are not aligned with the Meridian and perhaps this is an oversight… although, as far as I know, Paris is only city ever built on the basis of its meridian. In any case, we’d better get back in line. Turn right into King Street. Halfway down the block at number 40, there is another Melbourne-type laneway, and if you take just a few steps along you will find Station 16 on the wall to the right. But beware of the time warp on this corner!

Back at Station 14, when we encountered our first blaze tree, I promised to say more about the use of reference trees as markers on the colonial landscape – which I discovered were fundamental for the trigonometric survey of parishes and property parcels providing retraceable locations for land corners and boundaries.

Trees, being abundant, were the most convenient reference marker available in the early days of the Colony. Not only were these once a common sight, at the time survey reference trees were protected by law. The term ‘blaze trees’ is colloquial (an expert can tell us why), but in practical terms a surveyor’s task was to ‘blaze’ the baseline and boundaries of their survey (Spooner 2019: 3).

This was supposed to take the form of a ‘horse shoe’ mark, which entailed stripping about half a metre of bark and then making three horizontal marks with an axe several inches apart, and repeated on both sides of the tree – but it was often crudely done by untrained surveyors.

The practice of marking reference trees entailed a complete lexicon of signs to be chiselled  in the blaze, including parcel numbers, distance to corners, and the initials of the surveyor.

In 1853, for instance, Act 16 Vic. No. 15, decreed that the Broad Arrow would be exclusively for surveys conducted for the New South Wales colonial government (Marshall 2001: 13). Sometimes carved into stone but more often cut into the bark of the tree, this was the most ubiquitous symbol in the surveyor’s lexicon – and the clue for Station 16.

The origins of the Broad Arrow are uncertain but it is consistently featured on British ordnance survey markers, as well as being adopted as a symbol of ordinance in the British Army. Most Australians will however recognise the mark from the convict prisoner’s uniform. In both the case of land surveys and uniforms, it denotes property of the Crown, to whom of course convicts also ‘belonged’, although the colonial government’s intention was to avoid the theft of clothing rather than to brand the convict per se.

The Powerhouse collection, for instance, features a men’s convict jacket from Great Britain, worn in Australia (1855-1880), which is stamped with the mark ‘WD’, indicating the War Department, which took over the supply of convict clothing from the Board of Ordnance in 1855, and a Broad Arrow mark, signifying British government property.

The broad arrow brand is still used today to mark survey references as the property of the Crown and Australian military property, and unsurprisingly there are laws against its unauthorised use.