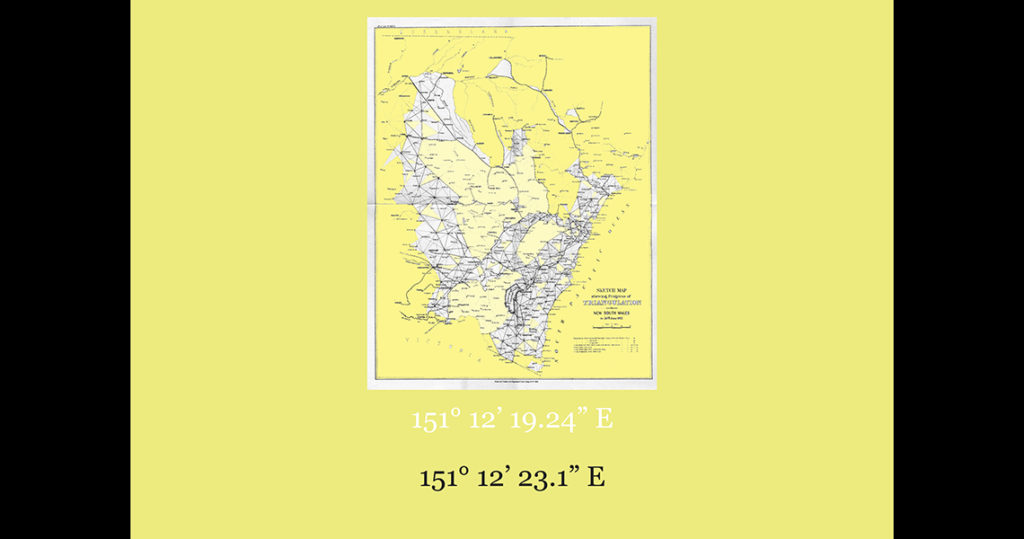 Keep going down Clarence Street, look out for the nice Deco buildings over the road, and continue until you see two spindly trees, and in front of Air China on the shiny electrical box is Station 15.

We may not recognise it today but, as conservation ecologist Peter Spooner (2005: 59) states, the ‘rectangular and meridional alignment of property boundaries is one of the commonest marks on a landscape modified by European settlers’. Oddly, when you travel through New South Wales, or when you examine a boundary map (whether town or country) this logic does not seem to have been applied in reality across the whole state. The aberrations in the shape of the state’s territorial boundaries entail a very particular tale of the use of European systems of measure for the expropriation and control of property, human liberty and natural resources – and the failings of these systems.

Cartography was not a novel instrument of colonisation when applied to Australia, but the need to apply precision to assure the legality of claiming vast tracts of uncharted land soon became evident. While a number of maps were produced for the fledgling settlement of Sydney, most were rough sketches of land parcels and the names of those who had been provided a title or occupancy (despite the lack of law or sovereignty to do so).

The early allotment of Observatory Hill can be seen on the left map in figure 1, specifically the lands adjacent to the future site of the Observatory (at that time known either as Flagstaff Hill or Fort Philip). Among other intriguing details, it is striking that the measures for each of the title boundaries are provided in meridional coordinates. However, which meridian these were based on is a matter of debate!

In the records of Government Astronomer of Victoria, Pietro Baracchi from 1904 (pp. 326-28), Fort Macquarie was the location for longitudes determined by Cook in 1770, followed by Hunter and Bradley in 1788, and Flinders in 1803. While Dawes’ observatory, established in 1788, was given a longitude of 151° 19’ 30”, John Read’s recent research (2015: 51) found that Dawes’ observatory longitude was only used as a time reference for calibrating ships’ chronometers with the midday signal.

Read does however reveal that the time ball was moved to Flagstaff Hill in 1825, and it would be interesting to know on what basis time was being reckoned given that no trace remained of Dawes’ observatory by 1795 (Read 2015: 52). Additionally, this is the first time I’ve seen a reference to a time ball predating that of the one that was built for Sydney Observatory in 1858.

In 1833, the only instruments capable of precise longitudinal calculations were at Parramatta Observatory (1821-47). Surveyor General Thomas Mitchell had already protested about the longitude of Dawes’ observatory being out by 11 kilometres, and had himself adopted the Parramatta determination for his expeditions (see Read 2015: 52). The righthand map states that these plots are intended for sale – this being the cartography of Mitchell, whose name we will hear again.

The next map we see in figure 2, shows the progress that had taken place by 1855, after Sydney City commissioners ordered a trigonometrical survey, for which survey bases and marks would have been made but have long since disappeared (Marshall 2001: 120).

Two years later, in 1857, the Governor General of New South Wales gave a public lecture on the importance of the science of triangulation for the Colony. According to the report in the local Newspaper of Sydney, the speech was delivered in the Hall of the Mechanics’ School of the Arts, last evening [1 September 1857] by his Excellency Sir William Denison.

‘Everyone who is possessed of property in land, or who has implanted in him those feelings (I may almost call them instinctive) which lead him to hope at some future time to be able to say, ‘This land is my own’, has a knowledge of the fact that the boundaries of that land must be somehow or other marked out for him. The process by which this is done is commonly called surveying.

What, then, is the course which ought to be followed when it is proposed to commence the survey of a country? Experience has shown that the only mode in which correct results can be obtained is to do that which you would perhaps infer from what has been said – namely, to divide it into a series of triangles of such dimensions as the nature of the country will admit of – to subdivide these into smaller triangles; having thus determined a large number of fixed points throughout the country, the subdivision of these smaller triangles into allotments of any size or figure becomes an easy process, and, what is better, a sure and certain one.’

But, Denison warned, ‘if executed ignorantly or improperly it gives rise to interminable litigation, of which we already have in this Colony many examples, and shall probably have many more’.

When Denison took over as Governor of New South Wales in 1855, the Survey Department was plagued with issues of corruption and badly measured land boundaries. The errors and uncertainty introduced in the early colonial implementation of trigonometric surveys based on Sydney’s shifting meridian baseline were not the only factor contributing to the situation. Colonial surveyors were unskilled and untrained, and assisted by assigned convicts, so that countless mistakes were made.

The Survey Department was moreover in a ‘perpetual state of chaos’ that was becoming a public scandal due to delays and prejudiced land titling in tandem with the rapid and constantly expanding frontier of the Colony, which had quickly blown out to 7422 parishes over a vast area in a matter of decades (Spooner 2005: 60).

To make matters worse, most of Sydney and large swaths of the colony had been mapped on the basis of inaccuracies, and it seemed the whole survey of New South Wales had been badly done. It thus was Denison’s intention to establish the Observatory in order to fix a baseline for a proper survey of the whole Colony.

There was also the question of Thomas Mitchell’s legacy, who had allowed poor practices to worsen and who was a divisive character ‘distrusted by conservative squatters and admired by frustrated and radical settlers’ (Baker 1967). Denison sought to redress this by instigating a Royal Commission into the Survey Department in July 1855, and given Mitchell’s known ‘record of determined insubordination’ Denison was also probably hoping to remove this thorn in the Colony’s side. Fate decided likewise, when Mitchell died of pneumonia in October 1855, before the Commission report was tabled.

Ultimately, due to the lack of any meridional baseline or proper methodology Mitchell’s foundational work was deemed merely a ‘reconnaissance’ survey (Marshall 2001: 120), although there was evident effort made in Mitchell’s first year in office as Surveyor General to map the waters of Sydney Harbour seen here in figure 4.

It was not until 1865, most likely thanks to Denison’s efforts, that a ‘pure’ trigonometrical survey was embarked on in order to validate the colonial premise of land rights (Marshall 2001: 120). The underlying problem of the lack of any defined meridian alongside the lack of standard measures plagued this work early on – as it continues to do now.

Issues for surveyors were underscored when Federation required the unification of all the colonies. As the nation’s surveyors came together for a conference in 1912 on the trigonometric survey of the country, New South Wales Government Surveyor Poate revealed that in the 47 years since the ‘pure’ trigonometrical survey began that they had only succeeded to triangulate one-fourth of the state (our clue for this station’s poster).

Despite these challenges and contradictions, the colonial frontier rapidly advanced hand-in-hand with surveying. In Stations to come I will share more on the long-term impacts of surveying practices on the environment and landscape of Australia, and for the contested march of possession under the false auspices of British sovereignty.

Congratulations if you reached the end of this post!!

Pietro Baracchi. 1904. Federal Handbook of the British Association for the Advancement of Science, Chapter VIII, ‘Astronomy and Geodesy in Australia’: pp. 326-330.