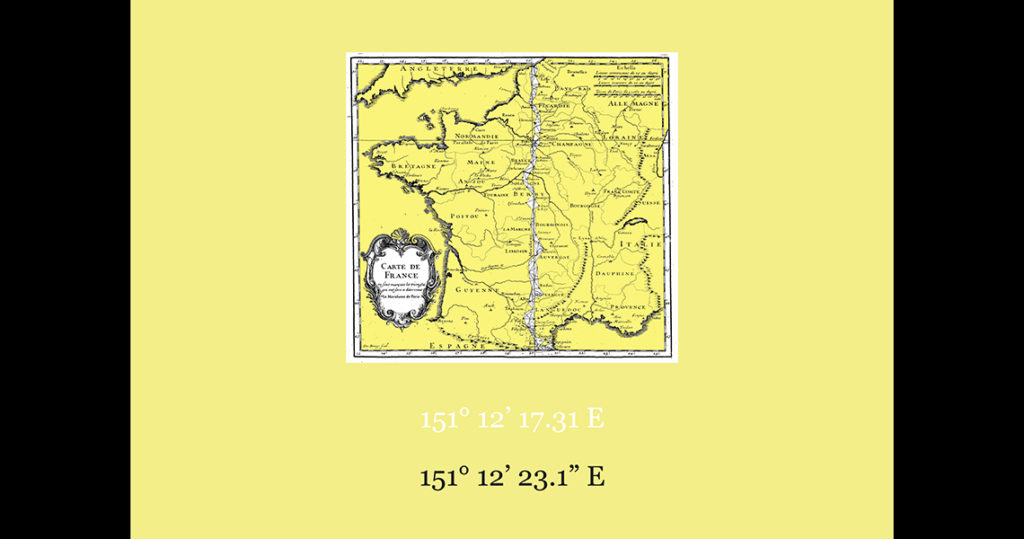 More coffee shops, you should see Pie Face across the road, but keep going past another grey wall, on the other side it where there is the Telstra sign you’ll find Station 10.

In 1792, the figure of the Earth was foremost on the minds of two French scientists, Pierre Méchain and Jean-Baptiste Delambre. Not only was this a fundamental question for astronomy, it was also a decree passed down from the French Revolution, which called for a single metric system of measures (of weight, volume, space, time, etc.) as a national democratic and egalitarian (and notably taxable) principle. Prior to this, measures had been decided by each local lord or ruler, or the merchant classes, and since each trade and every town had their own version of the measurement system, there could have been more than eight hundred units of measure, and a quarter of a million different definitions.

France was not alone in the political effort to establish universal measures based on natural phenomena and using a decimal system – as advocated by Enlightenment era scientists across Europe and Britain. The idea of a single metric system was however given its ultimate form with the metre, as it was derived from the measure of an arc of the Earth itself, known as a quadrant.

The meridian was first established in 1667 at the Paris Observatory, with the idea that the building would transect the line from the North Pole to the Equator. In 1792, it served as the ideal base for this arc, having already been surveyed using the triangulation method for the map of France in both 1720 and 1744 by Cassini and his son (which is the clue in our poster). It was decided that one ten-millionth of this arc would provide the final unit of measure for the metre to be physically produced in the form of the mètre étalon – the incarnation of which paradoxically led to further contradictions.

Many literal steps (on foot) were required to realise this metric metre standard. Although in order to estimate the entire length of the quadrant, Méchain and Delambre only needed to determine the section of the meridian arc from Dunkirk to Barcelona within France (and luckily not all the way from pole to equator!), this still involved a very elaborate triangulation process.

The northernmost section alone, between Dunkirk and Paris, required one hundred triangles. The longest baselines of these were more than ten kilometres, and were measured by platinum rods laid out on the terrain that had to be moved many thousands of times over to cover the baseline. All of this was undertaken on foot, with their meridian circle and all of the rods in tow. As such, it took the duo more than seven years to complete, even though they had based many of their meridian stations on prior surveys – those elaborate triangles which captured my imagination when I first saw them on a map of France in 2012.

Not long after having completed this mission, Méchain found that an error produced an underestimation affecting the final measure. Though Méchain sought to rectify this problem, he never officially corrected the record. Still concerned, in 1806 the Academy tasked another two scientists, the young François Arago and Jean-Baptiste Biot, to improve the accuracy of the arc measurements by making an extension of the southern limit of Méchain’s trigonometric chain from Perpignan to the Balearic Islands, with seventeen new triangles spanning Majorca, Minorca, Ibiza and Formentera.

Apart from Arago’s own published autobiography, scant records remain of this historical prolongation – a gap that prompted me to try and find out whether any trace remained of Arago and Biot’s journey to Formentera, the southernmost point of their survey. Apart from a general reference in Arago’s account to it being on the highest point of the island, simply named ‘La Mola’, meaning mountain, I knew nothing of the location of their station.

Since Formentera is mostly flat, it was easy to find a bus to take me up the only hill I could see. When I arrived at the top, in a village called El Pilar de la Mola, I took a coffee in a small bar. I doubted anyone would know about this obscure history, and my plan was to simply wander the streets in the hope I might find a sign. I decided in any case to ask the woman serving coffee if she knew anything about the meridian. As it happens, she said, the man who just walked in now, is an expert on the subject.

Pablo, an Argentinian architect, had immigrated to the Island some decades ago, and as it turned out had even written a book about Arago’s mission. It was with great enthusiasm that he offered to take me to the edge of the village, to the private house where the remains of Arago and Biot’s lost survey station survived, albeit with only the tip of the trig tower protruding from the rooftop, having been completely encased in a house.

Pablo watched on curiously while I attempted an impromptu restaging of one aspect of the measurement process that Arago and Biot had used, which entailed sending flashing signals -across the sea from one station to the next for triangulation readings.

Arago noted that their preparations for this work provoked extreme surprise of the few inhabitants of the island, for whom a horse and cart was just as foreign, forcing them to carry stone pillars for the meridian telescope by hand up the hill. Both the white pillars and the lighting of bonfires on these peaks at night aroused fear and suspicion among locals, who were only just emerging from the Spanish Inquisition and now faced the new threat of Napoleonic invasion (although it is unlikely that the French were so popular beforehand).

Arago and Biot’s scientific equipment, white totems, and luminous signals were not only decidedly pagan, it also seemed like the work of French army spies sending coded messages. When Arago remained behind to complete the final calibrations, he was arrested and imprisoned, but managed to flee in a fishing boat. This was the first of a sequence of extraordinary adventures and narrow escapes over the entire year that it took to return to Paris: being taken hostage by pirates, stranded in Algeria before being blown off course in a tempest, and finally placed in quarantine.

Arago finally returned to Paris in 1809 – to a triumphant reception. After all that, the results lodged in the French Academy produced only a miniscule variation from Méchain’s first meridian definition of just 0.02 percent. Furthermore, the prototype standard metre or mètre étalon, had already been made available in 1799, in the form of a platinum bar engineered by Étienne Lenoir.  Today it is held in the archives of the Bureau of Weights and Measures, at Sèvres, on the edge of Paris.

As the first official metre prototype to be fabricated by the French Republic, É́tienne Lenoir’s 1799 ‘mètre-étalon’ remained the standard for ninety years, even though it was well known that being fashioned in platinum made it vulnerable to changes in its dimensions due to the temperature. It was only replaced in 1889, when thirty platinum-iridium bars were made and stored at different locations around the world. But copies of any of these were still imprecise and as material objects were as subject to loss of mass from entropy – the ravages of time.

These features provided the basis for a sculpture cast in bronze from a piece of petrified timber – heavily decayed, and scored with a series of fine lines – that I found by chance in my back garden in Melbourne. The imprecision in the application of this measure to the vast and changing conditions of the planet are contemporaneous to questions of how to continuously update the measure of the figure of the Earth – major issues even today, to be revealed in future Stations.