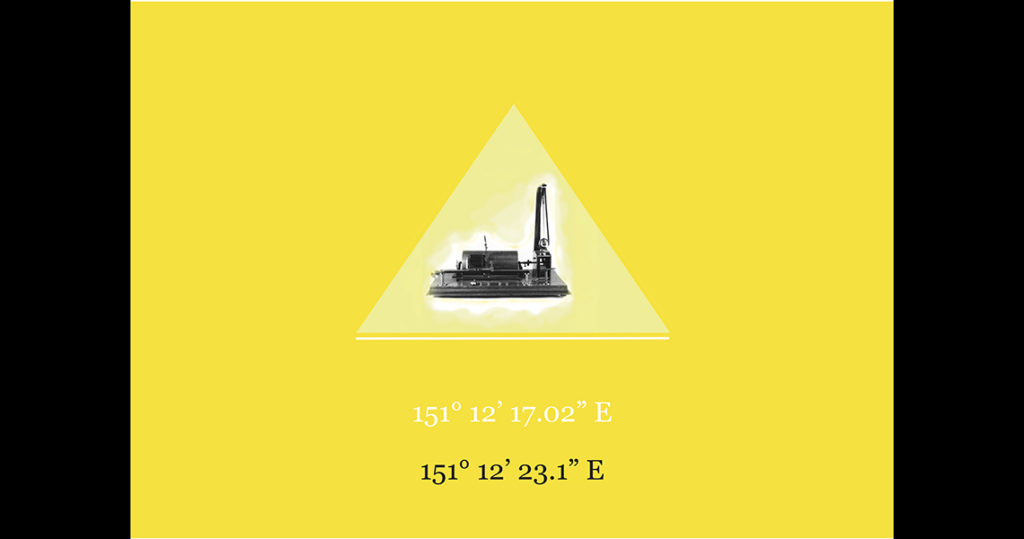 Out from under the highway overpass, follow Clarence Street, pass two pillars in front of SnapFitness, until you reach number 45, and on behind the column facing Campos Coffee is Station 8. But not as far as the bus stop…

During its first 70 years, the reckoning of time on the Australian continent required constant calibration across an array of meridians at observatories and trigonometric stations. Each town and village, moreover, ran on their own local ‘mean’ time, and scarce public clocks were prone to malfunction and time lags, leading to greater frustration than if no timepiece existed at all.

Finally, however, from the 1860s, wire telegraph signals permitted the unfolding of a single timekeeping system. A precursor to the Internet, the telegraph network was the second chief development in the British Imperial mission to universalise time.

The first Australian telegraph line, operational in 1854, linked Melbourne Observatory with the time ball at the Port of Williamstown (the following year, even breaking news of the Eureka Stockade from a telegraph sent from Geelong). Finally, in 1858, the same year that Sydney Observatory was established, a direct telegraph link connected it with its counterpart in Melbourne.

The final link-up of the submarine telegraph cable from England to Australia transmitted the first ‘time signals’ directly from Greenwich to Australian observatories in 1871, although Melbourne may have again beaten Sydney to the post. Up to a certain point, the time was being first of all determined at Sydney Observatory from star transits, this data then being sent via telegraph and recorded on the Melbourne chronograph (which is the clue in Station 8’s poster), allowing Melbournians’ clocks to be synchronised.

These same signals were transmitted to telegraph stations in each major colonial capital at one o’clock every day, and thereafter distributed to the townspeople via the city’s local time ball.

In a somewhat theatrical flourish, as late as 1906 the Sydney Observatory Time Ball’s visual communication was being augmented by canon fire from Dawes Point (although this timing was notably never precise). Thankfully, the telegraph network finally enabled a subtler communiqué via the colonial postal service.

The telegraph was also vital to the expanding colonial railways. The need to ensure that every town that a train passed through was running on the same schedule was a vital impetus for the imposition of ‘standard’ time meridians being set, first of all in North America, then in England (for which the Greenwich standard was chosen).

By 1874, an elaborate system of clocks and timekeeping was in place for Sydney’s trains, with a direct telegraphic link to the Observatory’s meridian clock established in 1876 (Running on Time, 2016).

In colonial Australia, centralised timekeeping for communication and transport inaugurated the second era of territorial and economic dominion. This is why clocks remain a notable presence at both post offices and railway stations even today (any readers knowing about the evolution of timekeeping and the link between the government postal service and Sydney trains from this era are welcome to comment).

The significance of the chronographic recorder as part of the evolution of this empire of time is often overlooked. If you’d like to track back to Station 1, take another look at the innocuous postcard that I found pinned on the wall of Sydney Observatory’s Transit Room. What looks like a garage experiment is in fact a delicate electronic schema to order time, as you can see here in Figure 2.

When I first saw the Observatory’s postcard of this drum or barrel chronograph, it immediately caught my attention. It was not the first time I had thought about time being marked on paper, which seemed to be artistic phenomenon as well as a continuum of the ancient art of marking time. Take for instance this Upper Palaeolithic era bone carving, discovered in the mid-20th century at Abri Blanchard in Dordogne, France, and thought to be one of the earliest objects showing the use of a symbolic notation to represent or visualise an astronomical cycle (also, perhaps an object that awaits repatriation?).

This bone’s engravings cast my memory back to an essay I wrote in 2007, to accompany an exhibition of Natalya Hughes’ works in Melbourne – For and From My Father ­–  an incredible tribute to her dying parent. I remember Natalya’s works on paper, pierced as they were with her time of grief. They inspired me to write about entwinement of punctuation with time, specifically recalling a pianola from my own father’s home – an instrument that features a roll of paper covered in tiny holes. As the scroll turns, the perforations permit air to be released to trigger specific piano keys to be struck at certain points in time. As it happens, ‘Blue Moon’ is the only tune I can ever remember it playing.

In contrast to the cyclical, slow passage of the moon through its cycle, the transit of a star occurs in an instant. The problem for the transit observer was not only that humans are unreliable judges of time’s passage, but also because the differences being recorded were miniscule. A previous, even less precise method involved estimating the interval of the star’s crossing between two beats of a clock.

The chronograph was thus introduced to automatically record time by making pinholes on the chronograph’s rolling drum of graph paper. Most crucially, this allowed for the comparison of the sidereal time on the transit clock (with a pinprick made every second) and those of star transits at the exact time at which they occurred, as a telegraph key was triggered by the astronomer, possibly the same trigger being held by the reclining astronomer in the photo of the transit circle at Station 1 in Figure 1.

I have not been able to locate collection records as yet, but if any of Sydney Observatory’s original paper  chronograph scrolls still exist, these would be exquisite annals of time past.