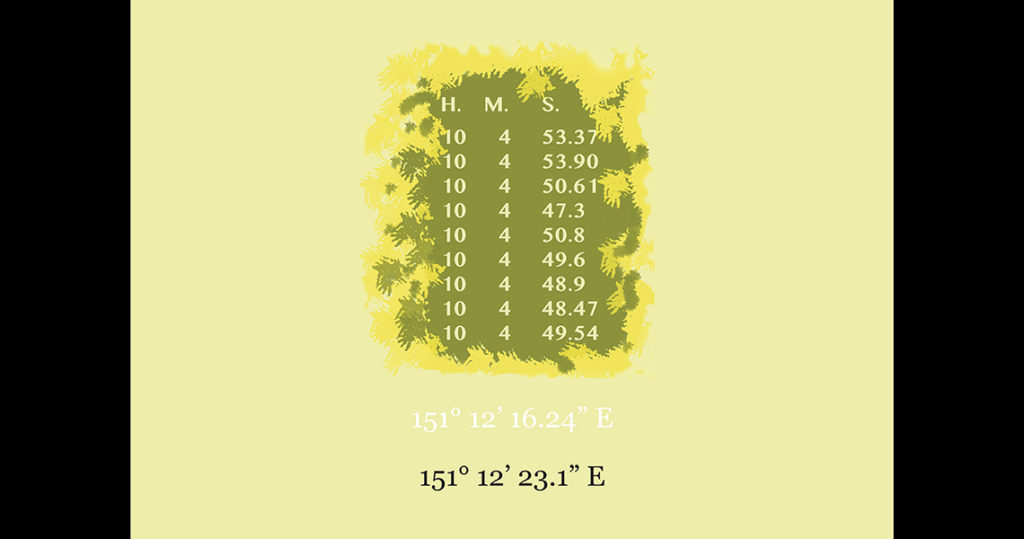 Curve around to the right, but keep an eye out for the bike lane. Take the zebra crossing to the other side of Kent St and then a left along Kent over Gas Lane. After the Australia Post box, cross over again. In front, is a set of steps going down. Don’t take them, but instead veer off just a little ahead along the path to the left where you see the Dr Seuss-like palm tree. Straight ahead, just under the freeway overpass, on a highway pylon is Station 7.

In 1858, the year of the Observatory’s establishment, the first value of the longitude of the Sydney Observatory was apparently obtained by the Reverend William Scott, derived from the observations of 21 transits of the moon. The result was 10h. 4m. 49.0s – that is 151° 12′ 15″.

It is little known that Sydney Observatory revised its longitude with reference to Greenwich on many occasions between 1874 and 1904, as seen on our poster. The difference in seconds may seem minuscule, but they each amount to several metres of displacement in space.

Was this because the Meridian was moving or was it due to errors as well as changing methods and locations?

In the end, our historical account reveals that there was no ‘original’ Meridian at all – and that those fixed were subject to change. A shift of a few centimetres may seem like a minor difference when it comes to the scale of the whole planet, but the exactitude of these measures matters since they have been used to define every square millimetre of property on the continent – through the trigonometrical surveys that emanate from that line.