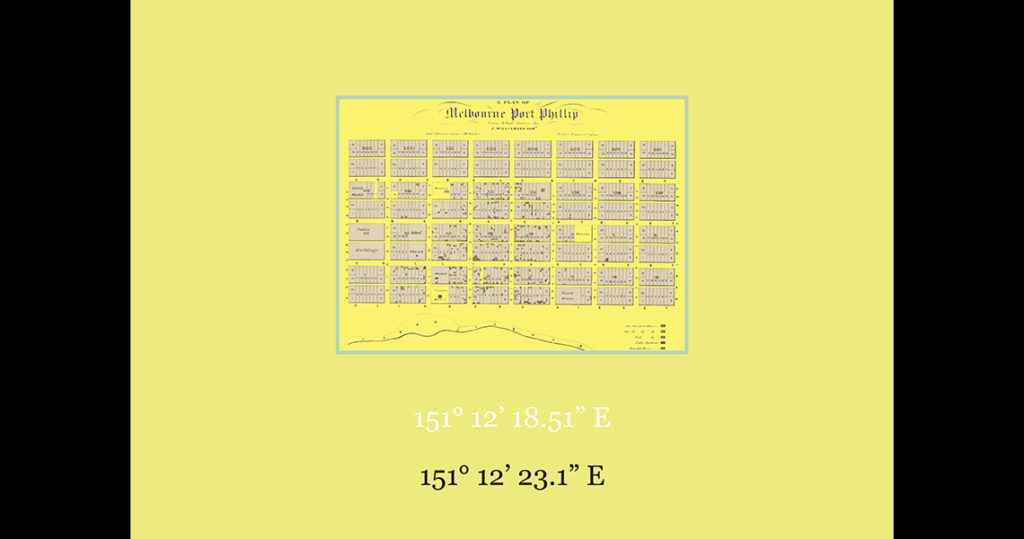 Walking alongside the Fort Street Public School and note the sign: ‘Success Through Diligence’ … keep going. In the little cul-de-sac, on the left there is lonely stone pillar, this is Station 4.

Aside from the determination of time, the meridian provided a means to measure out the Earth. Ultimately the ‘prime’ meridian was instrumental in the colonisation of Australian space and time. And yet there are conditions of the Earth itself that challenge the premise of the absolute measure of time and of territorial boundaries.

What was the first meridian determined on this land? It’s actually unknown. Perhaps it was a French navigator or Dutch, or even Portuguese. As far as the records go, every British sailor from Cook onwards needed to measure longitude upon landfall. Although the story of Captain William Dawes’ Observatory down on the edge of Tar-Ra, or Dawes Point, is often said to be the ‘first’ observatory, this discounts millennia of First Nations’ astronomy practices.

And there are other accounts. One of which comes again from Andrew James. In his 2006 essay, ‘The Dawn of Australian Astronomy (1770-1820)’ James describes how the French ‘La Perouse’ expedition set up a temporary observatory in Botany Bay in 1788. All records of their observations were however lost when the ship sank during the return voyage.

The point of these anecdotes is that the debate about a single time, an original observatory or a prime meridian is futile, because meridians cannot be universalised or tied down to one place.

And yet, Fort Macquarie’s measure provided the basis for the first longitude of Melbourne to be established in 1839, when Victorian surveyor Charles James Tyers fixed the position of the 141st Meridian on a point on Batman’s Hill, Melbourne, at first by the transportation of chronometers, and after that by triangulation with a small theodolite. As such, it was Sydney’s Fort Macquarie Meridian that provided the longitude reference for subsequent survey and layout of Melbourne’s famous gridded city.