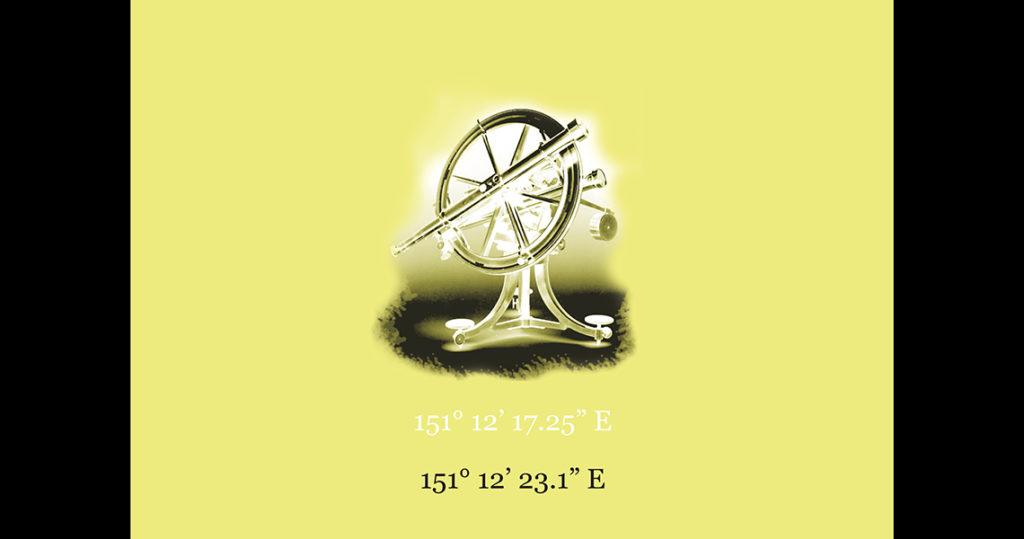 On the front lawn of the Observatory today stands a funny white structure, in fact a thermometer shed – which forms part of yet another key historical role of the Observatory: meteorology. Under this shed is an obelisk-like pillar, which you too can see if you squint at the image below. This this is Station 2 –  the ‘south marker’ for the transit circle ‘s meridian.

Sydney Observatory’s original Meridian is supposed to emanate from the exact north-south axis of the 6 inch transit telescope and its extension is known as a ‘baseline’, which should in principle continue in a ‘great’ arc across the continent and around the world. If we wander out into the front yard Observatory it is possible to follow this line a few metres to the south marker.

The origins of the south marker are the subject of debate, recorded in an Observatory blog post by Nick Lomb, dated February 8, 2012. Titled ‘The stone survey marker on the meridian line at Sydney Observatory has an unclear history’, the entry produced a long dialogue between Nick Lomb, Andrew Jacob, and historian and astronomer Andrew James. According to James, Lomb’s doubts were founded since this marker was not in fact the first marker to be installed, but that ‘a new north-south’ had been determined after the transit circle instrument was installed at Sydney Observatory in February 1877, based on observations published by Chief Astronomer Henry Russell in 1881.

The adjacent platform (shown with stairs, in Figure 2, in the early 20th century) allowed the observer to align the marker with a collimation telescope just inside the Observatory and then to the Transit Telescope. Most curious is the question that James leaves hanging at the end of the blog, when James notes a small aperture visible on a brass fitting built into the left pivot of the transit telescope and asks: ‘Is this the basis of the meridian line of Sydney?’ In any case, James points out that these reference markers were often left in place because surveyors needed to recalibrate the baseline, which shifted due to continental drift.

I wonder about the impacts of the ever-changing conditions of the planet on such orthodox measures. Do they help us to grasp the paradox of time as we know it, which flows forward like an arrow and yet fluctuates according to rhythms and physical conditions? These are some of the questions to consider as we continue to pursue Sydney’s Meridian southward beyond the perimeter of the Observatory grounds.