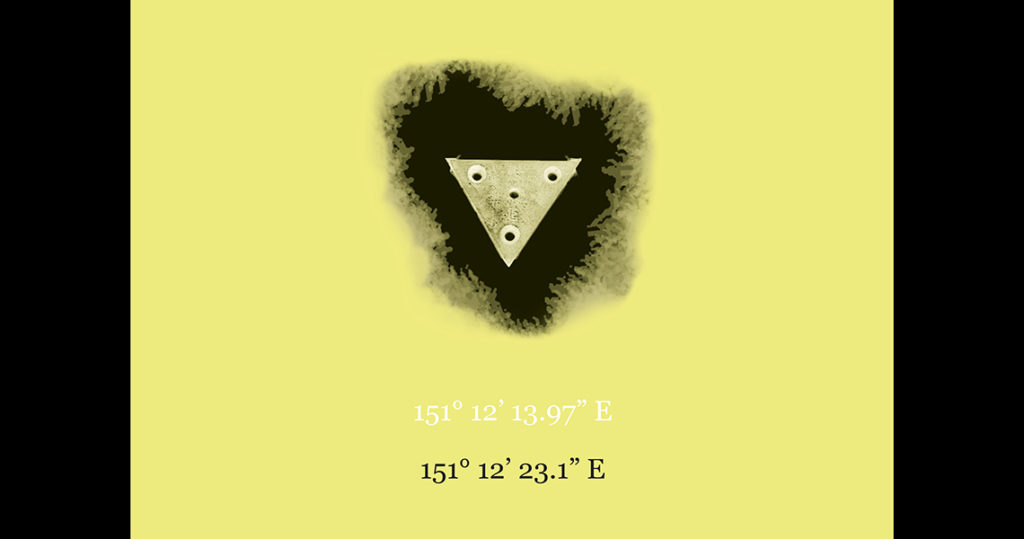 I’m guessing you want to know how a meridian is made? In astronomical terms, put simply, it is an arc drawn through an imaginary ‘great’ circle that passes through the two celestial poles: north-south, its counterpart being east-west.

When correlated to a point on the Earth, a meridian is not only an ‘invisible’ line but also one that is arbitrary, because it is an arc that could be drawn anywhere over a terrestrial (earth) or celestial (sky) sphere. The first and only line will always be a ‘prime’ meridian – a ‘zero’ in space and time. But if you want to know the relative location of a meridian around the planet you need two measures to provide you with your ‘longitude’.

First of all you need to calculate ‘midday’. But this is an ancient skill. If we look directly above us at solar noon, we will be midway between sunrise and sunset on that particular spot. The Sun also crosses overhead on the celestial meridian at the same time. The word itself is revealing: meridian comes from the Latin meridies, meaning ‘midday’, and this is where the term ‘a.m.’ (ante meridiem) and ‘p.m.’ (post meridiem) come from.

To determine the longitude of a place you need not only to know the time but also to what time it is at a place of reference, called a ‘prime’ meridian. To do this, even over a few metres, requires a portable and accurate clock that keeps ‘standard time’ of that prime location – the most renowned of these being Greenwich Mean Time.

The problem of longitude was one of the most challenging questions for navigation and thus for colonisation in the mid-18th century. It was invention of the marine chronometer (such as the E520, which Matthew Flinders used  to circumnavigate and chart Australia from 1801 to 1803) that provided the means for the British to reliably navigate the planet, and facilitate its program of colonising Australia.

When it comes to determining a reference or prime meridian on land, the counterpart to the chronometer is the transit telescope. From the early 17th century, largely thanks to the work of Galileo Galilei, the capacity to both view and track the stars was transformed by the perfection of telescope technology.

Here in Figure 1 is the Observatory’s 6 inch refracting Transit Telescope made by Troughton and Simms (1875-1877). Sometimes also called a transit ‘circle’ telescope, it was the workhorse of the Observatory up until the 1960s performing observations for timekeeping and meridian measures, and even serving as the early apparatus for the ‘Mapping the stars’ project. It is situated on a north-south axis that enables two precise measurements. The first is the position of a star in the sky.

The second measure is of time – which is possible to determine once a star’s position is known – is its split-second crossing or ‘transit’ from east to west. As seen in Figure 2, the observer reclined under the telescope, waiting for the rotation of the Earth to carry the star across the field of view of the across the fine spider web lines on the telescope’s eyepiece.

This precise moment of this crossing was used by astronomers to calibrate their ‘transit’ clocks. In the Transit Room is a postcard tacked on the wall, shown in my photograph below (Figure 3). Here we see the elaborate set-up that wired the telescope to the Observatory’s Hardy Sidereal Time Tegulator clock.  Made by William Hardy (1795-1821), this clock was used for transit observations, up until the 1860 regulator clock by Charles Frodsham was installed, which was in use at the Observatory for over 100 years.

A metre to the right, just next to the Transit Telescope is a little metal triangle. This is Sydney Trig. E (or Trigonometrical Station E), one of the markers I mentioned in yesterday’s Introduction, which was established based on a meridian survey of 1927 – and is notably at some distance from the Transit Telescope – which is already a curious sign of shifting ground. This reference was moreover used as the origin for the Trigonometrical Survey of NSW and the for the Triangulation of South Eastern Australia until 1966.

In the early 20th century, the Trig E (possibly a copy) was situated on top of the Observatory’s Time Ball Tower. This provided surveyors clambering up the Observatory tower stairs with a clear view to triangulate across Sydney city’s increasingly cluttered skyline, lugging their theodolites onto the roof until sometime in the 1980s. This marker was removed during renovation works at some point, but Astronomer Nick Lomb informs us that it was replaced as recently as 2012, to mark a new Department of Lands survey naming it Observatory E with its Longitude coordinates being 151° 12′ 4” E.