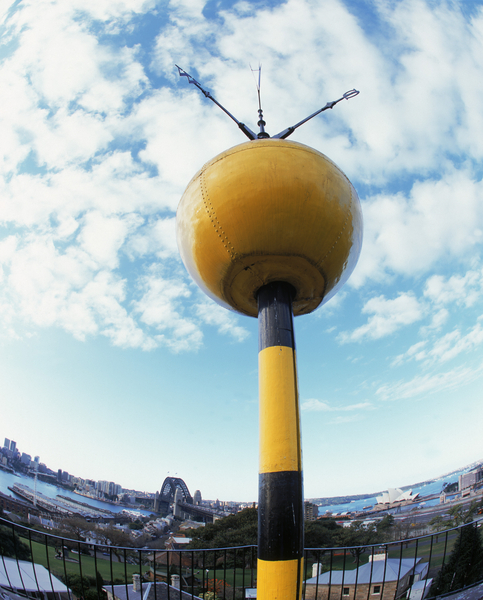 On this day in 1858 the time ball on top of the Observatory tower was first dropped. Officers aboard ships in the harbour watched carefully and noted the time on their chronometers (accurate and stable clocks) at the instant the ball dropped. By doing this every day while they were in port they could “rate their chronometers”, that is they could find the rate at which their chronometer gained or lost time. No clock runs perfectly, even today, but chronometers would gain or lose time at the same rate for months on end. Once a ship left port they would still know the true time wherever they were. That time, some astronomical tables and a healthy dose of mathematics allowed them to know their position and to sail safely across the oceans.

Following its restoration over the past couple of years the time ball was brought back into operation in time for our 160th birthday last year. This year a new weather vane was installed (the original has been retained in the MAAS collection) and a lightning conductor was added. The Observatory sits on the highest natural point in the city and lightning has struck a few times here over the years.

We still drop the time ball each day at 1pm so if you’re nearby look up and catch this 161-year old tradition in action.