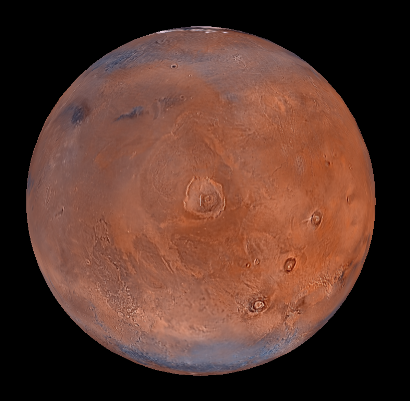 If you look towards the eastern sky after sunset (during July and most of August 2018) you will see a bright yellow “star”. In fact, this is Mars, aka the “red planet”.

Why is Mars so bright?
Mars is presently at its closest and brightest to Earth and, through a telescope, looks larger than it has at any time since 2003. It won’t look this good again until 2035 – 17 years from now.

Mars is further from the Sun than Earth and so takes longer to orbit the Sun. Every roughly two years and two months Earth catches up and overtakes Mars like an Olympic runner on the inside track. At this point the planets are relatively close – at about 60-million km – Mars appears bright in the night sky and we see Mars in detail through a telescope. When the Sun, Earth and Mars are lined up we call this an “opposition” – Mars is literally opposite the Sun in the sky. This year the opposition of Mars occurs on July 27 at 3:13pm AEST. But Mars will look bright, and good through a telescope, throughout July and August and astronomers loosely refer to Mars being at opposition through this whole period of time.

If oppositions happen roughly every two years and two months, why is this opposition special?
Mars has a particularly elliptical (or oval) orbit – well, if you drew the orbit on a piece of paper you wouldn’t see the oval shape, but it is more oval than all the other major planets, except Mercury. As Mars travels around its elliptical orbit it is sometimes further from the Sun, and at other times, like now, closer. Earth’s orbit is also elliptical and in July each year Earth reaches its furthest point from the Sun. Altogether, this means that at every seventh or eighth opposition, or every 15 to 17 years, Mars is at its closest to the Sun and Earth at its furthest at the same time. The two planets get particularly close and we have a “favourable” opposition. Back in 2003, at the last favourable opposition, Mars appeared at its largest and closest for 60,000-years. This year it will appear 97% as big as it was back then – so its still well worth a look.

The ellipticity of Mars orbit means it reaches its closest point to Earth a few days after its opposition on July 27. So while Mars is opposite, or in line with, the Sun on July 27, we wait till July 31 for it reach its closest point when it will be just 57.6 million km from us. And just hours after opposition, as Mars sets in the west on the morning of Saturday July 28 it is accompanied by the Moon reddened by a total lunar eclipse. More details about this eclipse here.

What can I see by eye?
By eye you will see Mars in the constellation of Capricornus. Throughout most of July it will be brighter than Jupiter. But, despite its name, the Red Planet never looks traffic light red particularly at these opposition times – it’s usually a pale orange or deep yellowish colour. And this year it is looking particularly yellowish – more about this below. By eye you will also see Mars in “retrograde” motion. What’s that? Mars, like the outer planets Jupiter & Saturn, slowly drifts past the stars towards the east. Observing it weekly should be enough to spot this. But as the Earth passes between the Sun and Mars the planet appears to reverse direction and move westwards. This backwards, or retrograde, movement is just a relative effect like perceiving a car on a highway to be moving backwards as you overtake it. Mars moves retrograde from June 29 through to August 28.

During the early evening throughout July and into August 2018 Mars will be in the eastern sky. As we move into September it is in the northern sky.

…and maybe even a dust storm. In fact, presently, a planet-wide all-engulfing dust storm has enveloped Mars. Virtually no surface detail is visible. The storm blew up in late May and rapidly circled the planet. It is this dust storm that is making Mars a bright yellow at present – you are seeing the effect of the storm with your own eyes. Unlike Earth, with it vast oceans and rain to wash the dust out of the atmosphere, Mars is bone dry. Once dust rises it can take months to settle back to the surface. We can barely predict the weather on Earth, so we can only hope the dust clears to reveal the surface of Mars before we draw away from it on our inner path around the Sun.

This NASA video shows the effects of the present dust storm on Mars.

But if, no when (let’s be positive!), it does clear, what will I see through a telescope?
Right now it’s spring in the southern hemisphere of Mars. You may spot the remains of the south polar ice cap, which has been shrinking over the last few months. Pale frosts might appear near the morning edge of the planet. Sometimes clouds are seen streaming downwind from the tops of the volcanoes of the Tharsis region. Or even from Olympus Mons itself – a 25km high volcano three times higher than Mt Everest whose peak is as good as in space compared to the plains surrounding it. One of the most obvious surface features is Syrtis Major, a dark triangular projection that crosses the equator. It’s been likened to the shape of India. It is in fact an enormous shield volcano – a shallow broad volcano one thousand kilometres across.

But remember that Mars is half the diameter of Earth and it’s still 57 million kilometres away. Surface features, clouds and so on can be hard to detect at first. Observing takes patience and persistence. Ideally wait till Mars is high overhead (later in the evening) to get the best “seeing” or the best view through Earth’s seething atmosphere. Mars rotates in almost the same time as Earth does, 24-hours and 38-minutes, so to see its various faces watch it for a few hours on one night or at the same time for successive nights.

Make the most of this favourable Mars opposition period – while we are spoilt for images from spacecraft and landers this is the best view human eyes will get for some time.

4 responses to “The 2018 Favourable Opposition of Mars”