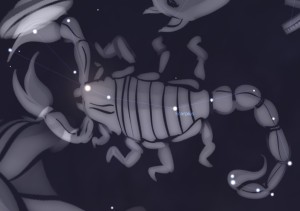 The constellation of Scorpius the scorpion in the southern winter sky. Image made with Stellarium

In 2014 Dr Louise Pryke investigated the well-known zodiacal constellation of Taurus, the Bull. In her most recent research Dr Pryke has been exploring the ancient myth and astrological traditions surrounding the constellation Scorpius.

When early humans first began to look up at the stars, and to tell stories about the great beings they saw among the constellations, scorpions had already inhabited the Earth for hundreds of millions of years. Religion and astrology were tightly intertwined in the ancient world. Four thousand years ago, the movements and relative positions of Scorpius were useful for the work of Babylonian magicians and astrologers, who left written records of the omens they observed, including cosmological traffic updates!

When a halo surrounds the Moon and Scorpio stands in it, it will cause men to marry princesses, (or) lions will die, and the traffic of the land will be hindered.

A comet appearing in the constellation was considered by astrologers to warn of a plague, but when the Sun rose in Scorpius, it was thought by alchemists to be the only time when the transmutation of lead into gold could occur. The Babylonian word for Scorpius,zuqaqipu, means scorpion. The word is formed from the Akkadian verb zuqapu meaning ‘to fix upright.’ In the Mesopotamian Epic of Gilgamesh, Scorpion people guard the path of the Sun, identified with the solar deity Shamash.

The appearance of scorpions in Greek and Roman myths may suggest an oriental influence on the genesis of these stories. The connection between astral bodies and religion continued in Greek myths surrounding the constellation. Scorpius was thought to be a giant scorpion, sent to Earth by the primeval mother goddess, Gaia. Myths involving Scorpius can be found in the works of several ancient authors, including Aratus and Ovid.

The legend tells that the giant and hunter Orion became confident he was the most skilled of all in the pursuit of prey; he threatened to kill every creature on Earth. This angered Gaia, who sent a giant scorpion to battle with him. The scorpion stung and killed Orion. Artemis and Leto prayed to Zeus on Orion’s behalf, and so Zeus placed the hunter up in the stars. Zeus also positioned the giant scorpion among the stars, as a memorial to him and the battle that had happened. The two combatants were located far apart from one another in the night sky, to prevent them from fighting once more. Despite this, Orion was thought to remember the sting of his scuttling adversary, causing him to flee across the night sky before Scorpio.

Thousands of years before the Greeks and Romans and in a distant hemisphere, the Australian Aboriginal people also saw the stars of Scorpius depicting a cosmic scorpion. For the Yolgnu people of east Arnhem Land, the scorpion in the stars was named Bundungu, thought to be busily gathering with his people along the banks of the Milky Way.

The celestial scorpion was known to the people of ancient Mesoamerica. Both the Aztecs of Central Mexico, and the Lowland Mayans are known to have had scorpion constellations. It is thought that these constellations may match up with the Scorpion of the zodiac, but there is of yet no clear proof. Among the Mayan people, the Scorpion and its astral associations were called ‘Sinan’(meaning ‘scorpion’). A depiction of this constellation occurs in the Paris Codex, where a scorpion is portrayed hanging from a ‘sky band,’stinging an Eclipse of the Sun symbol. It appears likely that the Mayans viewed the celestial scorpion as an eclipse-causing agent.

The identification of the constellation Scorpius with a scorpion in a variety of cultures seems remarkable, considering the different locations and historical settings involved. Considering the myths surrounding Scorpius allows for insight into the significant interplay between animal imagery, astrology and religion in the ancient world.

Cloudsley-Thompson, J. L. ‘Scorpions in Mythology, Folklore and History,’ in The Biology of Scorpions, ed. Gary A. Polis (Stanford, 1990).

About the author: Dr. Louise Pryke is a Research Associate at the University of Sydney. This article is drawn from research for a forthcoming book on the cultural symbolism of scorpions, for the Reaktion Press Animal Series.