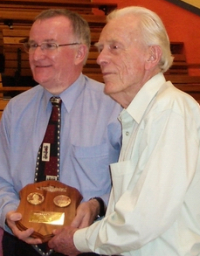 Bernard Yarnton Mills was an early pioneer in radio astronomy. Born on this day in 1920 at the Sydney suburb of Manly, he invented a new cross-shaped form of radio telescope while working with the CSIRO. Later, as a professor at Sydney University he was the driving force behind the construction of the large Molonglo Cross telescope.