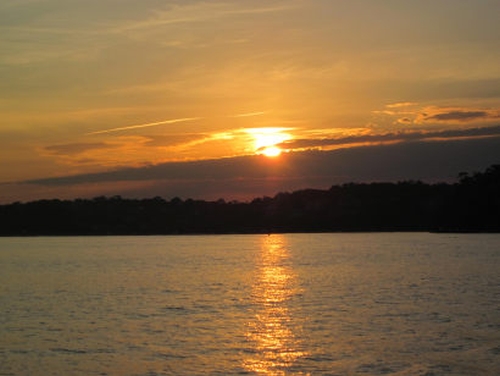 The winter solstice is the day when the Sun reaches its furthest north position in the sky and starts moving back towards the south. It marks one of the main turning points in the year with the others being the two equinoxes and the summer solstice in December. This year winter solstice is on Saturday 21 June with 8:51 pm the time that the Sun is furthest north. After 21 June the days start becoming longer and night time shorter.

In ancient Europe the winter solstice (in December in the northern hemisphere) was a time of celebration. The Romans had a week-long celebration called Saturnalia during which all wars had to stop and courts did not try criminals. Later this festival became Dies Natalis of Sol Invicti or the Birthday of the Unconquerable Sun celebrated on 25 December each year.

In many countries the seasons are fixed in reference to the four astronomical turning points so that we could take the start of winter from the day of the solstice. In Australia, however, the seasons traditionally start on the first of the appropriate month so that winter has already begun on 1 June. This fits in well with our weather for it takes a while for the ground and the oceans to come into equilibrium with the minimum of heat received from the Sun at this time. The coldest days hence tend to be in the middle of July and so in the middle of the three-month winter period. 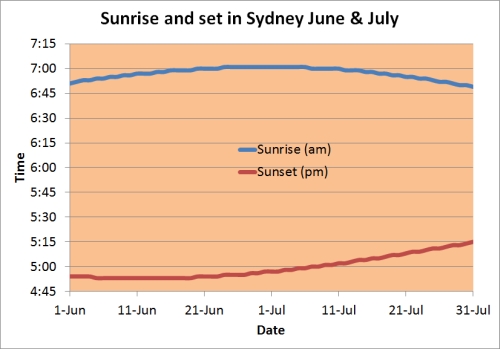 The times of sunrise and sunset from Sydney in June and July 2014. Chart Nick Lomb

On the day of the winter solstice the interval between sunrise and sunset is the shortest in the year, although the interval only differs by a second or two from that on the day before or the day after. This minimum day length would suggest that the latest sunrise and the earliest sunset for the year should also occur on 21 June. That is not the case as can be seen from the above chart. The latest sunrise (7:01 am) is about ten days later around 1 July, while the earliest sunset (4:53 pm) is about ten days earlier around 11 June.

Why does the Sun reach the point where it is due north later each day? This is a combination of two factors: one is that due to tilt of the Earth’s axis the plane in which the planet circles the Sun does not coincide with its equator; and the other that the Earth moves at varying speeds in its annual path around the Sun. These two factors together make up the equation of time that is so important when trying to read a sundial.

On Saturday 21 June we will have reached the shortest day of the year. From then on things are bound to improve. Maybe Australia will win its match against Spain at the World Cup on the early morning of Tuesday 24 June!