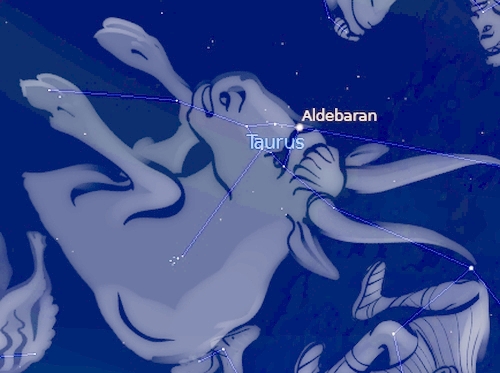 The constellation of Taurus the Bull in the February evening sky. Image created with Stellarium

Editor’s note: The origin of the constellations is one of the most interesting subjects in historical astronomy. Of the 88 constellations recognized by modern astronomers just over half came from the Ancient Greeks. However, most of these constellations predate the Greeks and are much older. These seem to have been created in Mesopotamia generally between 1300 and 1000 BCE, but a few maybe even earlier.

In the fascinating post below Dr Louise Pryke considers whether the well-known zodiacal constellation of Taurus the Bull is one of these early constellations.

When we look up at the stars forming the constellation Taurus, and see the outline of a bull, we are following a tradition which can be traced back to the great Bull of Heaven in the world’s oldest written epic, Gilgamesh.

The Gilgamesh Epic was composed around 2150 BCE in the Early Bronze Age and is written in the Mesopotamian cuneiform script – considered to be the oldest form of writing in the world. Along with cultural developments in writing, the Mesopotamian astronomer-scribes developed a foundational observational astronomy which showed sophisticated knowledge of the night sky. It has been suggested that these two cultural events were closely linked; the development of writing led to important advances in the investigative processes of early astronomy. The Mesopotamian astronomers recorded dates of heliacal risings and periods when the planets were visible or invisible, along with detailed star lists and information on how various astronomical objects related to one other and to seasonal events.

In the narrative of Gilgamesh we see the Bull of Heaven, identified as modern Taurus, being used as a weapon by the gods, who also have celestial aspects. The story of Gilgamesh involves the eponymous king of Uruk (located in modern day Iraq) who goes on a fantastical quest for immortality.

In the course of rejecting a proposal of marriage, Gilgamesh arrogantly insults the Mesopotamian goddess Ishtar. Known as the goddess of love and war, Ishtar was identified and worshipped as the planet Venus – the morning and evening star. Inanna-hud (Inanna of the morning) and Inanna-sig (Inanna of the evening) are two known forms of Inanna (Sumerian Ishtar) which were recipients of offerings. The planet Venus gets its modern appellation from the Roman version of the Greek goddess of love, Aphrodite. Scholars believe many aspects of Aphrodite’s image developed from Mesopotamian Ishtar.

In response to Gilgamesh’s insults, Ishtar goes to her father seeking the Bull of Heaven, who she then brings to earth to destroy the legendary king. The Bull’s presence on earth causes a severe drought, and each snort of its breath results in terrible earthquakes which swallow up hundreds of people. However, Gilgamesh is able to use his heroic strength to slay the giant creature, and offers its heart to the Mesopotamian sun god, Shamash.

It can be difficult to precisely identify ancient star-names with modern constellations, due to scarcity of evidence and the continual movement of stellar objects. The best ancient evidence linking the mythical Bull of Heaven with the constellation Taurus comes from the Babylonian astrological and astronomical compendium known as “Mul.Apin,” dating from around 1000 BCE. Despite its incredible age, it is a matter of historical irony that Mesopotamian astronomy has only been recovered in the academic world relatively recently. The first tablet of Mul.Apin was published just over one hundred years ago in 1912 by L.W. King, with Tablet 2 following in 1924. Mul.Apin systematises and records various celestial phenomena, while also dividing the stars into paths of Anu, Enlil and Ea, based on stellar latitudes. The Bull of Heaven, or gu(4).an.na is located in the path of Anu, along with the Pleiades. 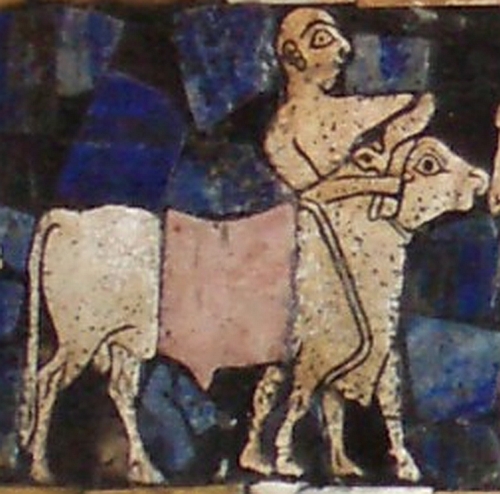 A Sumerian depiction of a bull, on a detail from the Peace Panel of the Standard of Ur in the British Museum. Photo Nick Lomb

In my recent research I have been asking the question: within the literary context of the Epic of Gilgamesh, is the Bull of Heaven treated as an animal by the ancient composers, or as a heavenly body? Does its celestial quality mean that it is, much like the constellation Taurus, a bovine quadruped in shape, but stellar in nature? The answer seems to be a little bit of both. There are undoubtedly celestial aspects of the Bull of Heaven in Gilgamesh – scholars have noted its home is in the sky, and in the Sumerian version of the myth, the Bull is known to graze at the heavenly horizon, having no food on earth. At the same time, the Bull is led by the goddess Ishtar with the aid of a nose-rope, and shows religious and material qualities in line with Mesopotamian conceptions of earthly bulls.

In the Epic of Gilgamesh, the Bull of Heaven transcends the boundaries between the earth and the heavens, while giving modern audiences a compelling insight into the ancient composers’ understanding of the universe.

Dr Louise Pryke is a Research Associate at the University of Sydney. Her research interests include the history of science and astronomy, ancient mythology and Epic literature.