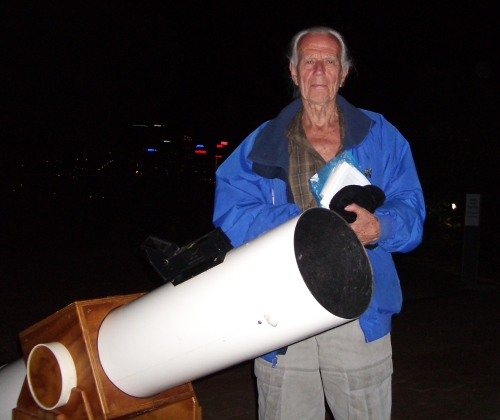 Last Wednesday, 15 January 2014, famous amateur astronomer John Dobson passed away in Burbank, California at the grand old age of 98. Dobson is best known for his design of an inexpensive and easy-to-make style of telescope, but he was also a pioneer in bringing astronomy to the general public.

John Dobson visited Sydney Observatory in 2008. Hosting him at the Observatory was a pleasure as, then aged 89, he was active, intelligent and erudite. He started his public talk in a dramatic fashion by throwing pieces of paper at the audience, which certainly grabbed their immediate attention. His talk was most interesting although he spent little time talking about what I would have liked him to talk about: the invention of the Dobsonian telescope, his public astronomy and his life. Instead he chiefly focused on his alternative cosmological theory, the Recycling Steady State Theory.

During his visit to Sydney Observatory John Dobson kindly signed the tube of Sydney Observatory’s Dobsonian telescope. At the time I thought that that made this telescope one of a kind, but later heard that he has done the same elsewhere. Still, the signature adds greatly to the importance of the telescope.

John Dobson led a fascinating life which included 23 years in a monastery of a Hindu order in San Francisco. Eventually, he was expelled from the monastery for sneaking off too often to make telescopes that he donated to people. At the time telescopes, especially those of larger aperture, were prohibitively expensive and he developed a way of making telescopes from the simplest of materials.

A Dobsonian telescope is an alt-azimuth design so that it can be spun around horizontally and be tilted up and down. The base with its two bearings is usually made from timber, while the tube could be cardboard or a plastic tube, possibly from a plumbing store. At one end of the tube there is a large curved mirror while at the other there is a smaller diagonal mirror that reflects the light to an eyepiece at the side (Newtonian optics).

Although the arrangement of a Dobsonian telescope does not track the sky, with two smooth bearings it is surprisingly easy to keep following objects as they appear to move due to the spin of the Earth. Users soon develop the knack of knowing the strength and direction of the gentle knock they need to apply to the telescope tube so that it stays centred on the object that they are observing.

Surprisingly, Sky and Telescope magazine, the foremost magazine for those with an interest in astronomy, rejected a submission from Dobson about his telescope design in 1969 saying that the quality would be too low for most users. It took until the early 1980s for a telescope manufacturer to take up the idea and Dobsonian telescopes soon spread world-wide.

After his long stint in the monastery John Dobson founded a group in San Francisco called the Sidewalk Astronomers. The group took their telescopes out into the streets of the city and let passers-by view through them the sights of the night sky. Again for its time this was a most innovative and positive idea.

Farewell John Dobson. You will be missed and fondly remembered.