An animated diagram showing the daily motion of the Sun at the turning points of the year, the summer and winter solstices and the spring and autumn equinoxes, as seen from southern latitudes at places such as Sydney, Melbourne or Perth. Diagram Nick Lomb

Would like to ask a question regarding the direction of Sun rise and set during Summer here in Perth. W.A.

I have been taking compass bearings of the direction the Sun has been rising and setting during Dec here in Perth.

I would have expected that the Sun would rise in the North East and set in the North West. Obviously my reasoning is flawed and I was hoping you could explain why.

My reasoning is that the furthest South the Sun gets is 23.5 degrees latitude on the Summer Solstice (22 Dec 13). As Perth’s latitude is nearly 32 degrees it would mean that the Sun is to the North of Perth and because of this I would have expected that the sun would rise to the North of East and set to the North of West.

Thanks for considering this question.

As can be seen in the diagram above, during each day the Sun moves in an arc that is always tilted at 32° (Perth’s latitude) to the vertical and with the highest point towards the north.

At the June (winter) solstice the Sun rises north of east, makes a small circle towards the north and sets north of west. At the highest point of its daily arc the Sun is 55.5° (32° + 23.5° (the tilt of the Earth’s axis)) to the north of the zenith.

At the December (summer) solstice it rises south of east, makes a large circle and sets south of west. At the highest point of its daily arc the Sun is 8.5° (32° – 23.5°) to the north of the zenith. 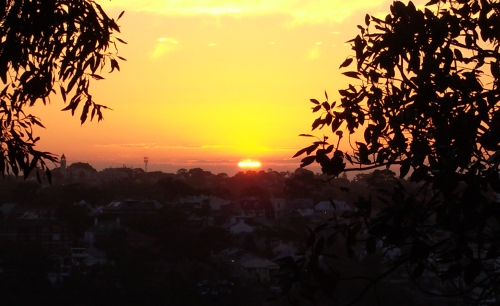 The Sun setting over Balmain, as seen from Sydney Observatory, on 29 August 2005. Over the next few weeks sunset moved to the left or south and by 23 September, spring equinox, it set behind the tower near the left hand edge of the picture. Photo Nick Lomb

The yearly back and forth movement of the rising and setting Sun along the eastern and western horizons, respectively, provides a useful calendar of sorts. When the Sun sets furthest to the north it is winter, when it sets due west it is spring or autumn and when it sets at its furthest to the south it is summer.

I hope that this diagram and text have helped to clarify the daily motion of the Sun at the different seasons of the year.