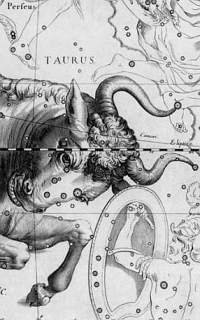 If we extend the line formed by the three stars of Orion’s belt towards the north (left in the evening) we reach the reddish star Aldebaran. That star is the brightest star in the constellation of Taurus the Bull. Its Arabic name means, ‘the follower’, indicating that it follows the nearby Pleiades star cluster.

A drawing of the constellation of Taurus. Aldebaran represents one of the eyes of the Bull. Drawing by Johannes Hevelius in a star atlas published in 1690