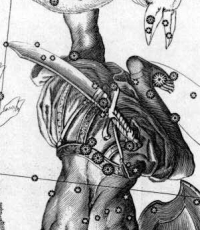 Orion the Hunter is low in the eastern sky. The three stars in a row represent his belt while above the rightmost (southern) star of the belt is Orion’s dagger. Note that wearing the dagger above the belt was not a Greek fashion; it is just that Orion was first named from the northern hemisphere so that to us he is upside down.

A detail of a drawing of the constellation of Orion. Drawn by Johannes Hevelius in a star atlas published in 1690