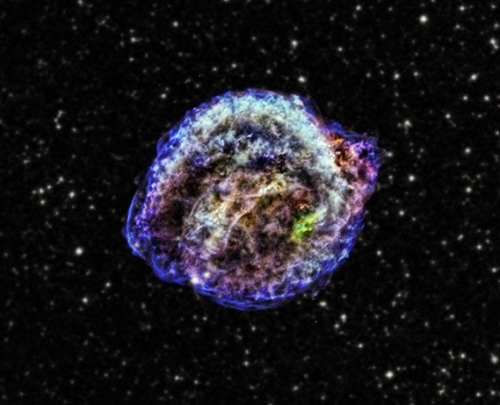 An X-ray view of the remnant left behind by Kepler’s supernova of 1604. The different colours indicate different energies of X-rays, while the background stars are from the Digitised Star Survey. Courtesy X-ray: NASA/CXC/NCSU/M.Burkey et al.; optical: DSS

This time of the year it is appropriate to contemplate the star of Bethlehem that is briefly mentioned in the in the New Testament’s Gospel of Matthew. Over the years astronomers have engaged in considerable speculation on what the star may have been, putting aside any considerations on whether it was meant to be purely miraculous or a rare, but natural phenomenon. With little description given – if it had been described as a hairy star we would know that it was a comet or if it had been described as new star we would know it was a nova or a supernova – there is scope for a wide range of suggestions: comet, nova, supernova, planetary conjunction and more.

Here we will mention just two of the theories that astronomers have suggested to account for the star. We will start with that of the late 16th/early 17th century German astronomer Johannes Kepler and then follow with Michael Molnar’s recent exposition that is regarded as a game-changer in tackling the problem.

In the autumn of 1604 European astronomers and astrologers were all carefully watching as the planets Jupiter, Saturn and Mars bunched close together in the sky. Kepler, observing from Prague, missed both the conjunction of Mars with Jupiter on 26 September and the conjunction of Mars with Jupiter on 9 October due to cloud. However, the day after the Mars-Jupiter conjunction a friend of Kepler saw a bright new star near Jupiter that Kepler himself saw a week later. He studied it diligently as it faded over the course of the next year and wrote up his observation in a book published in 1606. Of course, Kepler had no idea what he called the “Nova Stella” could have been; today we know that it was a supernova or exploding star and so far the last to be seen in our own galaxy.

From his observations Kepler drew the conclusion that important planetary conjunctions could be the precursors of the appearance of a new star. He calculated that there was a Saturn and Jupiter conjunction in June 7 BC and proposed that that was the time the star of Bethlehem appeared. He considered what this star may have been like and concluded that it “was not of the ordinary run of comets or new stars, but by a special miracle moved in the lower layer of the atmosphere”.

Not much credibility can be given to Kepler’s suggestion, but the work of Michael Molnar published as a book in 1999 has been treated most seriously by scholars. Molnar says that we should look for an event that astrologers of the time would have regarded as significant and not for phenomena such as novae or supernovae that modern astronomers would find of interest. As a first step Molnar deciphers the text describing that the star was seen “in the east” as meaning a heliacal rising, which is when a planet or star can be first seen in the dawn sky after a period of being too near the Sun.

In a complex discussion Molnar establishes the event as the heliacal rising of Jupiter on 17 April 6 BC, when Jupiter also approached the crescent Moon. Although the crescent Moon was too thin and too close to the Sun to be seen, according to Molnar that made no difference as the astrologers of the time could calculate that the event happened and that was sufficient for them.

The conclusion that the star of Bethlehem was an unobservable celestial event is somewhat unsatisfactory and Molnar may not be right in his choice of event. However, his idea of thinking about the star on the basis of the astrology of the time instead of the view point of contemporary astronomy represent a shift in attitude that is likely to be followed by future scholars. That these future scholars will ever come up with a definitive answer seems unlikely, but like the astronomers so far, they will have fun trying.

Michael R Molnar, “The star of Bethlehem: the legacy of the Magi”, Rutgers University Press, New Brunswick and London (1999)

6 responses to “Astronomers and the star of Bethlehem”