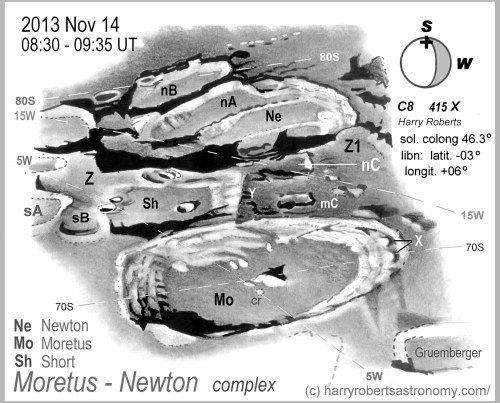 The region around the lunar craters Newton and Moretus. Sketch and copyright Harry Roberts ©, all rights reserved

The Moon’s south-polar regions often draw the sketcher’s eye: the whole area seems intricately fitted together by ‘Nature’s hand’ – a vast mosaic of impact craters. And as the landforms are seen almost side-on, the 3D grandeur of the scene is revealed: an astronaut’s view.

On Nov 14, 2013, lighting and libration made for a view deep into the rarely seen crater-complex named for Isaac Newton.

The great physicists Newton and Einstein are, ironically, both memorialised by craters that are hard to see – in zones much affected by libration. Newton lies near the Moon’s South Pole while Einstein is found in the extreme northwestern regions.

Newton is sited in the ‘southern cratered highlands’; the oldest and least modified lunar terrain – where craters overlap craters in apparent chaos. There are benefits in revisiting such sites as the complex landforms make a bit more ‘sense’ each time.

Moretus. Commanding the ‘approaches’ to Newton and just north of it, is big round crater Moretus: one of the deepest on the Moon, with a bright central peak – we can’t miss Newton if Moretus is in the eye-piece!

On the night of the 14th, Moretus was almost filled with sunlight and details of the slippage features on its high walls were seen well (Fig). On the western end of its crater wall are two distinctive ‘scallops’ (X) while scarps and terraces are seen nearby in a variety of lightings. Some roughness of Moretus’ western floor and a tiny crater near the central peak were noted.

Short. Wedged between Moretus and Newton is crater Short (Sh), shadowed on its N side, with bright secondary craters in it and nearby. The western (rhs) rim of Short looked like a large bright scarp. When new craters impact near existing ones their rims are often reshaped into polygonal forms as a result – and the bright ‘scarp-like’ feature (Y) connects Moretus to the Newton cluster of craters.

Newton complex. Newton is a cluster of maybe seven large craters that overlap each other: a very complex blending, not counting many small secondary craters. Some craters in the assembly are conventionally named as Newton, Newton A, B or C etc (Fig) – and this cluster may be the most extensive of its kind on the Moon.

In E-W extent it’s comparable to 114km wide Moretus – but from front (north side) Newton C to back, Newton B (south), is over 170km. Moretus lies at 70ºS latitude while the most southerly crater of the Newton complex lies on the 80ºS line – just 10º from the Pole. Let’s review the Newton complex in detail (Fig).

Nearest to Moretus, at the end of ‘scarp’ Y is a transverse ‘ridge’, Z – Z1, the north wall of the original or ‘ancient’ Newton crater and ~180km long.

Behind this ‘ancient’ wall are four distinct newer craters, they are Newton (Ne), Newton A (nA), nB and nD (Fig). Newton C (nC) lies outside the great wall (Fig). Newton D is mostly hidden by large shadows cast by the ‘wall’ Z – Z1 but a bright rim is seen where it abuts Newton (Ne).

Beyond (south) of Newton are craters nA and nB, the latter straddles the 80º latitude line. The bright rim of crater Ne cast thin shadows on the floor of nA.

Left from the main Newton craters is low terrain largely in shadow that comprises much of ‘ancient’ Newton, a much bigger ‘ruined’ crater. Confusing? You will find Whitaker’s 1950’s outline map of this region in ‘Chuck’ Wood’s “Modern Moon” on page 127.

Libration. Over time the Moon appears to both ‘nod’ as well as ‘shake’ its ‘head’ due to its relative motion – something we can see with the naked eye. Extreme southern features need a libration in latitude of up to -7º to be best seen. On the night we had just -3º, not ideal, but with the Sun’s altitude of ~40º above the site, combined to give a good overall view.

South of crater nB the terrain was darkening and a chain of bright points was perhaps the wall of polar crater Cabeus, catching the sunlight.

This was the third attempt to unravel the complexities of Newton: the confusion of craters across the field of view yielded only some of its secrets; progress – but the long-term project remains.

Seek out these exceptional regions for a telescopic ‘cruise’ over the highlands – it’s a view hard to match for grandeur and, incidentally, one that deserves a high quality wide-field eyepiece and plenty of magnification.

Best wishes to all for the Christmas season.