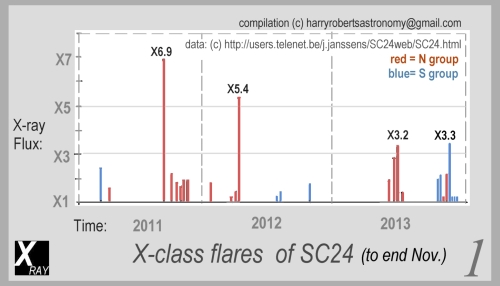 Flares stronger than class X1 during the current solar cycle plotted as bars. Some have been shifted a little to avoid overlapping. Sketch and copyright Harry Roberts ©, all rights reserved

Witnessing a ‘great’ solar flare is one of astronomy’s rare ‘treats’: they are uncommon at any time – and seeing one is a revelation!

If we define ‘great’ as any flare stronger than GOES X-ray class X1, there have been (as I write) only twenty-seven since solar cycle 24 (SC24) began five years ago.

Flare classes: There are five classes in the GOES system: they are A, B, C, M and X (for ‘extreme’?), each divided into steps 1 through 9, and class X describes any flare whose x-ray flux exceeds 10^-4 watts/m^2 at the satellite’s detector – the other classes are powers of ten weaker.

Flares are so hot they emit mostly in the x-ray band, and that flux is a good measure of total flare energy. In H-alpha they appear as irregular areas that brighten in a minute or so to at least twice the background brightness – often many times brighter. Most occur in sunspot groups.

Spot complexity. Class X flares occur in sunspot groups that have both strong magnetic fields and magnetic ‘complexity’. This ‘complexity’ may arise in various ways, usually when a new sunspot pair (or two) emerges within an existing group – particularly if one pair has its polarity reversed from normal. Field ‘helicity’, or degree of ‘twist’, plays a big role too – and the rearrangement or ‘reconnection’ of complex fields is what drives all flares.

These precursor events are uncommon, so ‘great’ flares occur only in brief periods during any solar cycle.

SC24 events. In SC24 the 27 X-class flares (so far) are ‘clumped’ into just a few short bursts of activity. Let’s consider events, year by year, since X-class flaring began in 2011. The graph, Fig 1, shows the SC24 flares >X1 plotted as bars, ‘shifted’ a bit to avoid overlapping.

2011 had eight ‘great’ flares: a good start to SC24 flaring and hinting at stronger ones to come. 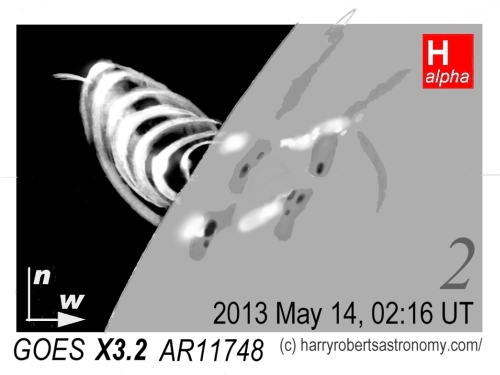 The first four were in AR11748 (mid-May), when the writer managed to log an X3.2 (strongest of 2013). Fig2 shows post flare loops above this sparse group, with its odd mix of fields. It had three more class-X flares in the range X1.2 to 2.8 over just three days.

The next most active spot group to host ‘great’ flares in 2013 was AR11890 that unleashed an X3.3, third strongest for the cycle and two X1.1 flares in November. The other ‘great’ flares of 2013 were the product of three separate spot groups. As the plot at the top shows activity was ‘clustered’ in May and in Oct/Nov.

November’s flares were mostly in southern spot groups – suggesting the southern hemisphere is playing ‘catch-up’ to northern activity that dominated in 2011 and 2012.

Trend. So far in SC24 the strongest flares were all in northern sunspots with an X6.9 and X5.4, while southern groups are yet to host a flare stronger than X3.3. No upward trend in the power of class-X flares is, as yet, seen (Fig1) – but with few such events, caution is needed: history suggests a rise in coming months.

Perhaps the last days of 2013 will unleash a ‘storm’ – not of bushfires we hope – but of X-class flares, under Australian summer skies. Remember, class-X flares are rare and always unexpected!