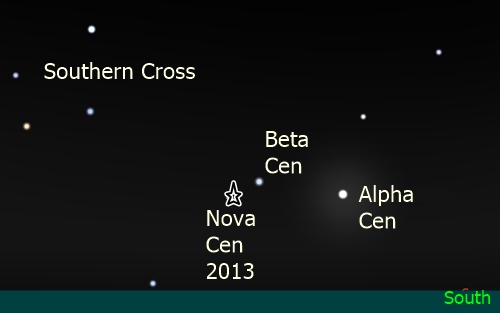 Australian amateur astronomer John Seach who lives on Chatsworth Island, which is between Grafton and Lismore in northern NSW, has discovered a star explosion known as a nova near one of the pointers to the Southern Cross. At last report Nova Cen 2013 was bright enough to be visible to the unaided eye from a dark country site and may still be getting brighter. From light polluted cities binoculars will be needed to see the nova.

The nova is easy to find but, unfortunately, this is a season of the year when the Southern Cross and the pointers are low in the sky after dusk. Hence the finding chart above is drawn for 11:30 pm and the nova will be higher in the sky as the night progresses.

Photography may also be possible. Put a digital camera on a tripod or other support, point it at the right part of the sky, turn off the flash, set a long exposure and then use the self-timer to to start the exposure. Hopefully, the nova can be found on the image by comparing with the finding chart.

There are different types of novae, but this one is believed to be the type when a lot of material has been dumped on a dead white dwarf star by a companion star. When enough material builds up a nuclear explosion takes place on the surface of the white dwarf. Generally, a nova likes this only brightens for a few days and then fades away.

Have look if you can and let us know if you had found the nova and seen an explosion on a dead star!