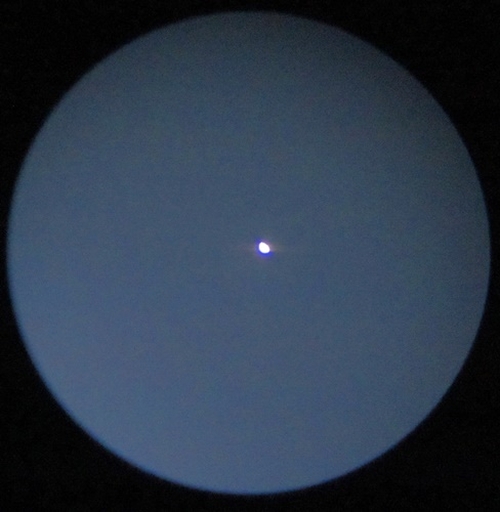 Venus photographed through a small telescope during evening twilight on 30 November 2013. Though by eye the planet appeared as a crescent, the compact camera held up to the eyepiece could only indicate that Venus was not a complete disc. Photo Nick Lomb

The second planet from the Sun Venus is currently shining like a searchlight beam in the western sky after sunset. Many people on noticing this bright light for the first time are mystified about its source and the Observatory’s Lights in the sky webpage has been inundated with anxious queries. Here let us examine what is going on and consider how often we see Venus as such a bright object. 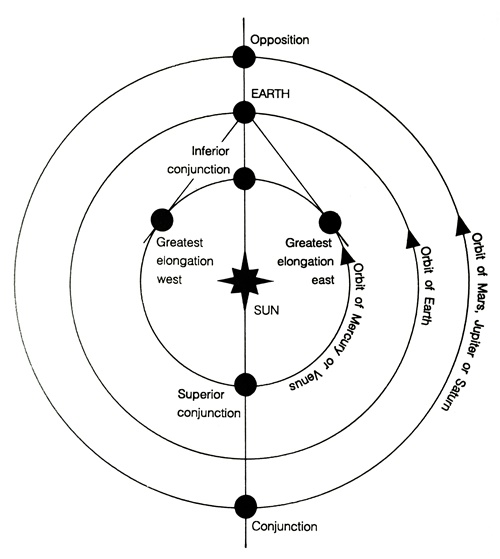 Diagram indicating the terms astronomers use to indicate the different positions of a planet in relation to the Sun and the Earth. Venus is at present approaching inferior conjunction on 11 January 2014. Diagram from the 1993 Sydney Sky Guide (now known as the Australasian Sky Guide).

Venus is bright as it is approaching the Earth on its way towards inferior conjunction (see diagram above). As it does so its apparent size through a telescope increases, however, at the same time less of its disc is illuminated by the Sun. As well, Venus appears progressively closer to the Sun and so lower in the sky at sunset. After the first few days of January 2014 it will be too close to the Sun for it to be observed.

At inferior conjunction Venus does not hide for long and reappears in the morning sky a couple of weeks after it had disappeared from the evening sky. Again it will appear very bright, although, of course, this time in the eastern sky. By contrast, at superior conjunction when it is on the other side of the Sun to the Earth it is hidden by the glare of the Sun for much longer. In 2014 Venus is at superior conjunction on 25 October; it will disappear from view in the morning sky during the first half of September 2014 and not reappear in the evening sky until late November. 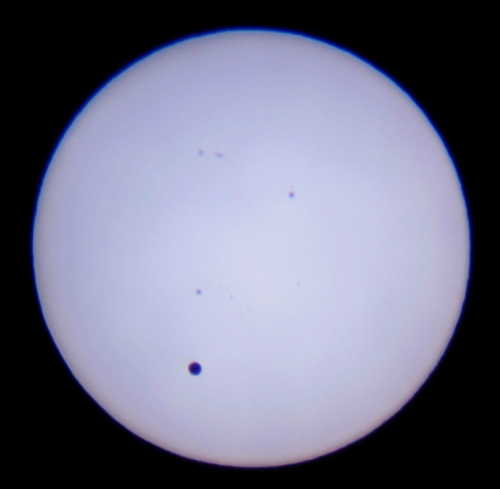 Venus transiting the Sun at the inferior conjunction of 6 June 2012. Photo Nick Lomb

There are patterns in the position of Venus. Given the period of Venus around the Sun as 225 days and that of the Earth as 365 days, it is easy to calculate that the time between inferior or superior conjunctions of Venus is approximately 1.6 years. The previous inferior conjunction of Venus was on 6 June 2012 when a spectacular transit of the planet took place. The next time Venus will shine so brightly in the evening sky will be in 1.6 years’ time or in July 2015.

If you do not want to wait 19 months then enjoy the present sight of bright Venus in the evenings in the western sky. You can look by eye, or preferably, through a telescope. If you do not have one or do not know of a friend or neighbour with one, then book into a public session at Sydney Observatory.