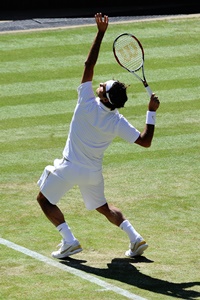 Is champion tennis player Roger Federer coming early to play at the Australian Open? No, but today the space rock named after him, 230975 Rogerfederer, is at its closest to Earth for the year at a distance of 264 million km. 230975 Rogerfederer circles the Sun every 4.6 years between the paths of Mars and Jupiter.