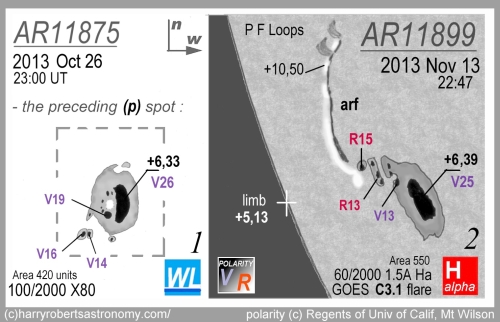 The Sun poses many puzzles – some yield to a bit of sleuthing; others remain inscrutable. We recently saw a complex group that survived its transit of the Sun’s ‘far side’ to become much more active during its second passage across the visible disc (AR11890).

Now (November) we are seeing a group that has survived its far-side transit to become an enormously large spot, but has been stripped of most of its earlier complexity. This is AR11899 – once part of October’s large and active group, AR11875.

During this earlier disc crossing (as AR11875) it hosted two GOES class-X flares (the strongest kind) and many lesser ones; a dramatic X2.3 flare with the group just behind the NW limb showed a range of amazing H-alpha transients, discussed here earlier. Would it return we then asked? Yes- it would!

Helio freeware sited the newcomer at +6,39 and gave it the huge area (for a single spot) of 550 units! What was the giant’s story?

Activity ‘nest’. In H-alpha there were signs of complexity: a long filament (arf) stretched from the spot northwards 5 degrees and faculae covered much of the disc east of the big spot. This showed that the big spot was part of a large activity area, now mostly spotless – and a GOES C3.1 flare erupted along the filament at 23:08UT: clearly the site was not dormant.

It was soon clear that the newcomer was the return of the large preceding (p) spot of AR11875 – and that all (or most) of the many following (f) spots of that group were now gone: yet the ‘old’ group was still capable of flaring!

The Fig, log 1, shows the large (p) spot of AR11875, 17 days earlier, with the few remaining (f) spots omitted for clarity: its area was then 420 units. When it passed the west limb 3 days later the few (f) spots were gone. Note that all the small spots attending the big ‘smiley’ spot were of violet polarity.

During its October transit of the disc the (p) spot of 11875 had very strong violet polarity, V26 (2600G). As it passed the west limb there were some signs of new red polarity near the big (p) spot and a striking light-bridge had divided its umbra (not shown). Then – it was gone for two weeks.

Return. During ‘far-side’ transit it seems the group had changed and new flux (spots) of opposite ‘sign’, i.e. ‘red’, had emerged near the old (p) spot (see log 2) on the eastern side, with values R13 – 15 in a tiny cluster of spots. And east of the main spot was the large filament that hosted the C class flare. The returnee was now dubbed AR11899.

Unseen events. Is this strong field the start of a revival of sunspot fields for SC24? I hope so – but guess it is just a surprising ‘one-off’. Still, somehow during its time hidden from view, the big (p) spot of AR11875 not only survived but also grew larger and its field grew stronger! This is not quite the norm for relic (p) spots.

Also, recall that it had 6º of westward proper motion during that time (Fig, long. 33º to 39º) – more than is usual, suggesting other unseen events.

As I write the flaring in AR11899 seems to have waned – but I’ll be keeping one eye on it when viewing in H-alpha, just in case! Note how big and dark it is on the Sun’s disc (WL filter users only). I suspect more action is yet to come.