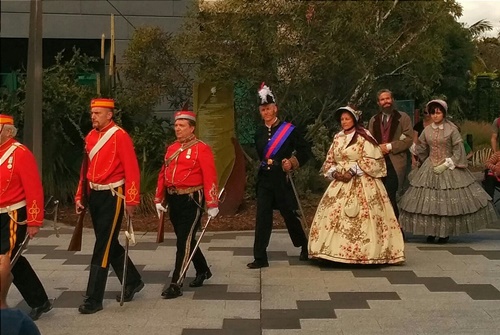 An honour guard of redcoats leads the entry of the 1863 Governor of Victoria Sir Henry Barkly and the Government Astronomer of the time Robert LJ Ellery together with their ladies into the official celebrations. Photo Nick Lomb

During the second half of the 19th century astronomy in Australia was dominated by Sydney and Melbourne Observatories. Sydney celebrated its 150th anniversary on 7 June 2008 and now it was Melbourne’s turn. Fittingly, in view of the past close cooperation between the two observatories, Sydney Observatory was well represented at the celebrations by the manager and both curators. 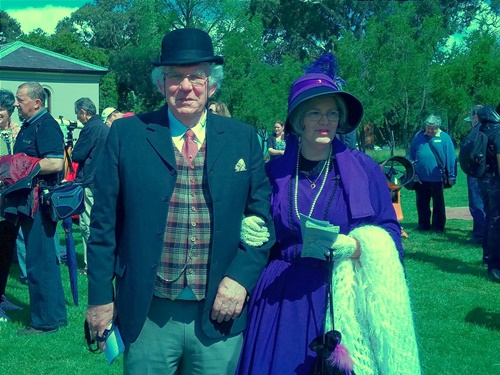 Leading member of the Astronomer Society of Victoria Jim Pollock dressed in period costume for his presentations on the history of the Observatory. He is seen together with his wife. Nick Lomb

In the morning the weather was wet and threatening, however, the fates were kind for during the afternoon the rain stopped and the Sun could be seen. There were plenty of activities for public visitors such as talks on the history of Melbourne Observatory, tours of the building, a large inflatable planetarium, face painting for children, wandering entertainers and, of course, telescope viewings. 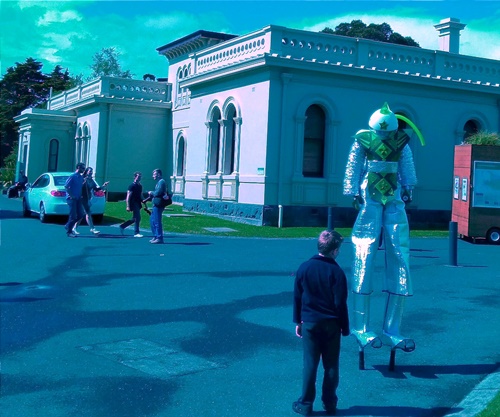 A tall spaceperson asking for directions outside the main building of Melbourne Observatory. Photo Nick Lomb 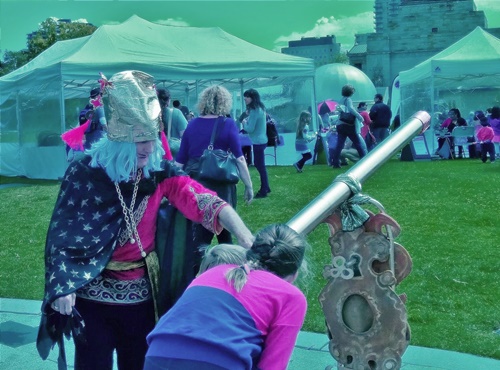 A visiting Italian astronomer demonstrating his wind-up telescope with the face painting tent and other activities in the background. Photo Nick Lomb 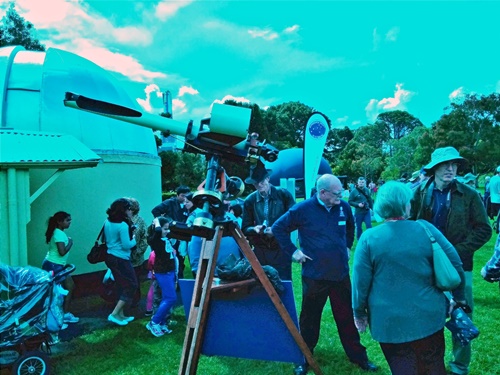 Astronomical Society of Victoria stalwart Barry Adcock (with name badge) and an unusual type of telescope, a Schiefspiegler telescope that is a mirror telescope with no central obstruction. Photo Nick Lomb

The official 150th anniversary ceremony was hosted by the well-known author and astronomy lecturer Professor Fred Watson of the Australian Astronomical Observatory and the ceremony was honoured by the presence of the Governor of Victoria, His Excellency the Honourable Alex Chernov AC QC. Other participants included Professor Tim Entwisle, the Director and Chief Executive of the Royal Botanical Gardens that operates the Observatory. In addition, there were surprise appearances by Sir Henry Barkly the Governor of Victoria at the time of the establishment of Melbourne Observatory as well as the original Government Astronomer Robert LJ Ellery. 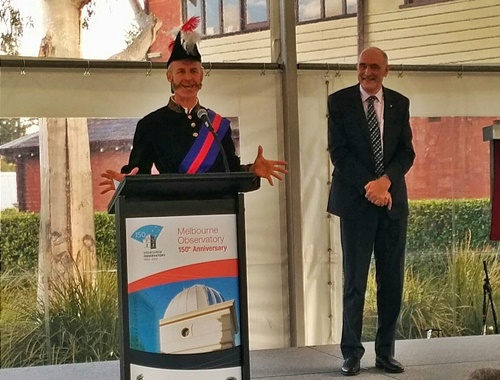 The official speeches all stressed the great historical significance of Melbourne Observatory and Professor Entwisle indicated his interest and support for the historic institution. Robert Ellery in his well scripted presentation was surprised by the absence from the site of the main feature of the Observatory, the Great Melbourne Telescope, the giant reflecting telescope with a 1.2-metre wide mirror that was installed there in 1869. However, he calmed down as he realised that serious plans are underway to reinstall the telescope at its original location in the near future. 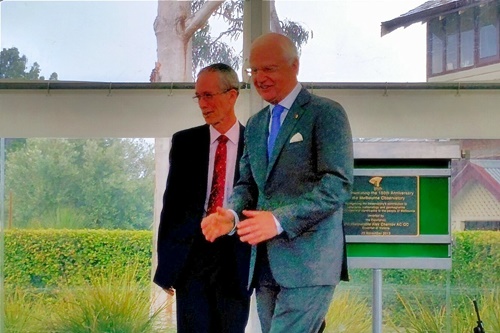 After the speeches the soldiers fired their cannon in salute and, as the rain started pouring down once again and people crowded into the marquee, Professor Tim Entwisle and present Governor Alex Chernov AC QC unveiled a plaque commemorating 150 years of the Observatory.

A good time was had by all at the 150th anniversary, but the celebrations did not end there for on the next day there was an all-day seminar on Australian Colonial Astronomy. A future blog post will report on the many excellent and informative talks highlighting a variety of relevant topics.