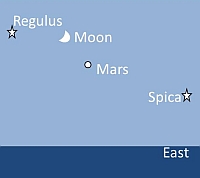 The red planet Mars can be seen each morning before dawn in the north-eastern sky. Tomorrow morning the crescent Moon acts as a signpost to locate the planet as it is above and to its left or north. On Thursday morning the Moon appears closer to the planet and is still above it, but is to its right or east.

Mars and the Moon with nearby stars on the morning of 27 November 2013. Chart Nick Lomb