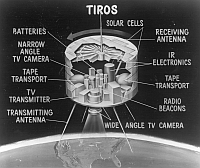 NASA launched one of the earliest weather satellites TIROS 2 on this day in 1960. Its name stood for Television and InfraRed Observation Satellite as it had two television cameras and two infrared detectors for observing clouds and atmospheric phenomena. The 127 kg satellite helped to prove the value of such spacecraft.

A cross-sectional view of the TIROS satellites. Courtesy NASA