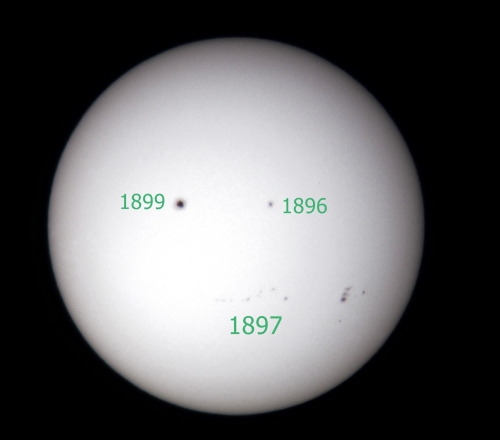 The Sun on 17 November 2013 showed lots of spots including some large ones, but AR11890 discussed in this post had rotated out of view on the western edge of the Sun two or three days earlier. The main sunspots are identified in this image with the extra 1 removed from the front of the number for clarity. Photo Nick Lomb

The parade of spots across the Sun is a majestic sight – but may give the impression that all spots are ‘new’, and making their first transit – in fact a percentage are making their second or even third return. The positions of new spots are routinely calculated and often reveal the ‘returnees’.

It duly rotated across the disc until on the 11th new spots began to emerge between the two main ones, briefly ‘welding’ them together as a mixture of polarities in one fairly large penumbra (Fig, inset lower left). The newly emerged flux caused NOAA to upgrade the group’s magnetic class to Beta-Gamma-Delta – and M class flares began. At this time I was restricted to a small 72/500 WL ‘scope and no H-alpha logs were made.

By the 17th more new spots emerged causing AR11861 to fragment into several elongated penumbrae with many spots spread over 13º of longitude – and it rotated out of view next day. I was not expecting a return: perhaps I should have! 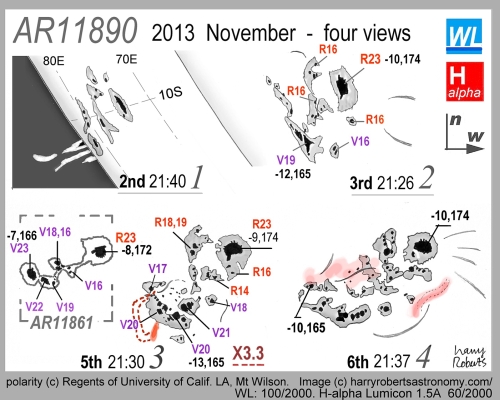 AR11890. By Dec 2nd (UT) the long focal-length ‘scope was back in use and showed a group of irregular spots rounding the eastern limb: irregular shapes imply magnetic complexity. The heliocentric coordinates of new the group soon showed that 11861 had returned – and was soon dubbed AR11890 (Fig, Log1).

The big change in 11861 since Oct 17 lay in its magnetic complexity: elongated and triangular shaped umbrae are seen in Logs 1 and 2. Clearly major remodelling of the group happened during its ‘farside’ transit with new (f) spots emerging a bit to the south of the (f) spots of 11861.

Spot emergence. Visible again, the group changed shape daily: the irregular shapes of Logs 1 and 2 grew rounder –as in logs 3 and 4. As well many new spots emerged, with 40 counted on the 5th and about 50 on the 6th – when its area grew almost to 1000units – a very big group.

GOES X3.3 flare. The emergence of new spots (i.e. flux) implies flares, and while the white-light log was being made on the 5th an X3.3 flare erupted. When H-alpha was again fitted at 22:30 it had almost faded, though a bright ‘strand’ (Log3, red) warned me that I’d missed something big (again!)

The GONG H-alpha network showed the full extent of the X3.3 and it is dotted (in red) on log3. This was a big flare – the strongest so far for a southern group in SC24. This may suggest that the southern hemisphere is nearing its maximum – while the north likely peaked back in 2011. Only time will tell.

The X3.3 flare in 11890 was the third strongest for this cycle. Perhaps this means that southern activity is rising and we may expect more even stronger flares in that hemisphere in coming days.

Returnee. While returnee sunspots are not uncommon – ones that are bigger with much stronger flares the ‘second time around’ are rare. Will 11890 survive to return once more at the end of November? Keep a close watch on the Sun’s southeastern limb.