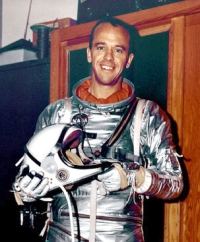 US Astronaut Alan B Shephard, Jr was born on this day in 1923 in East Derry, New Hampshire, United States. After service as a test pilot he was chosen as one of the Mercury astronauts in 1959. Two years later be became the first American into space when a Redstone rocket took his Freedom 7 capsule on a suborbital ride.