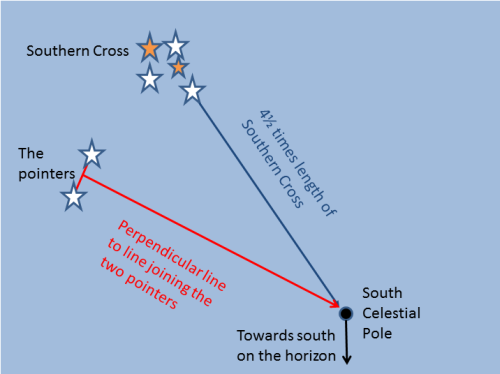 In the Southern Hemisphere we are fortunate in being able to enjoy a view of the bright stars that form the Southern Cross. They are also useful for they can provide a calendar, a clock as well as indicators for finding south.

On this blog we have looked at finding south using the Southern Cross previously, but the drawing included with the post only included one of the two main methods for doing so. A number of people commented that they prefer the second method involving the two pointers. Hence here we discuss both methods and they are both shown on the drawing above.

How do you find south? The first step is to identify the Southern Cross – it is a compact group of bright stars close together in the sky with the two pointer stars always pointing to them from nearby. Note that the Cross, known to astronomers by its Latin name of Crux, rotates in the sky during a night so that it can be found at different seasons and at different times low in the south, in the south-east, high in the south or in the south-west.

Method 1: Extend the main axis of the Cross from and in the direction of its brightest star by four and a half times its length (the span of the main axis of the Cross is approximately 6° while the distance from its brightest star to the South Celestial Pole is approximately 27°). You have now reached the South Celestial Pole – the point about which the Cross and all stars turn in the sky. From the Pole drop a line straight down to the horizon – that is south.

Method 2: Draw a line perpendicular to the line joining the two stars of the pointers and about halfway between them. Where that line meets the line formed by the two most widely separated stars in the Southern Cross is the south point in the sky (the South Celestial Pole). From the Pole drop a line straight down to the horizon – that is south.

It is worth practicing these methods from your backyard as knowing directions would be essential if you were ever lost at night in the bush or in a small boat at sea!