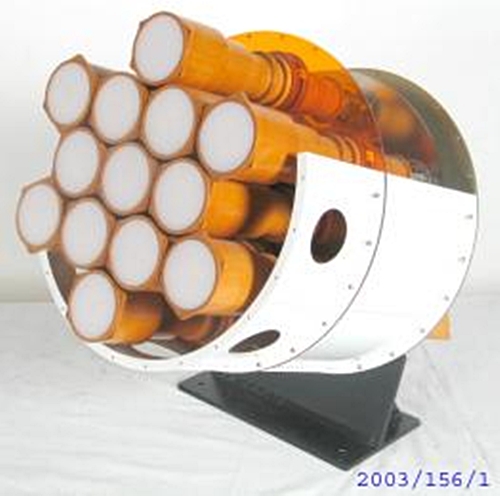 A scale model of the front section of the Parkes Multibeam Receiver. Courtesy Powerhouse Museum

Recently we discussed a visit to the Parkes Radio Telescope that has become widely known about in recent times thanks to the film ‘The Dish’. We found that the reason why the telescope is still useful for important research projects even after 50 years of operation is that new electronics and receivers for radio signals have constantly improved the sensitivity of the telescope. Today it is 10 000 more sensitive when it was built.

One of the most interesting and important instruments is the innovative 21 cm multibeam receiver built in 1996. As this instrument is still an operating instrument the Museum only has a scale model that was kindly built for it and donated by the Australia Telescope National Facility at Epping in NSW. For a number of years the model was on display at Sydney Observatory.

A radio telescope like the one at Parkes operates by radio waves from distant objects hitting the giant parabolic dish and then being reflected to the central focus of the telescope. There the radio waves enter a carefully designed ‘feed horn’ before reaching a receiver that converts the radio signals into electrical ones. Only radio waves from one spot in the sky are observed at a time so that surveying a large area of the sky is prohibitively time consuming.

This is where the multibeam receiver comes into the picture. It consists of 13 circular horns arranged in a hexagonal grid that is placed at the focus of the radio telescope so that the horns can receive signals from 13 adjacent spots in the sky. The radio waves from each of the feed horns reach separate receivers and amplifiers that are cooled to about -200°C below zero. Eventually after further amplification cables pass the signals to the control room for further analysis. In fact, there are 26 separate outputs as each of the feed horns collects waves at two separate polarisations (think of Polaroid sunglasses).

The wavelength collected by the multibeam receiver is 21 cm which is the radiation emitted by hydrogen atoms. This allows the instrument to be used to survey the distribution of hydrogen in the sky.

A main project with the receiver was the HI Parkes All-Sky Survey or HIPASS that surveyed the entire sky as seen from Parkes. Astronomers conducted this survey from February 1997 to March 2000 and then again in December 2001. The sky was surveyed in strips at the fast rate of 1° per minute. Not only was the presence of hydrogen detected in the survey, but its velocity as well.

One of the great advantages of a survey with a radio telescope instead of optical surveys is that radio waves can penetrate the dust in the plane of our galaxy. This is a region that is known to optical astronomers as the Zone of Avoidance.

A major data release of results came with the publication of the HIPASS Catalogue by a group of over 30 astronomers in 2004. A total of 4315 sources were plotted in the sky in three dimensions as velocity corresponds to distance. The survey is useful in estimating the mass density of hydrogen in the Universe and in finding galaxies of types that can be missed in optical surveys due to their low surface brightness. As expected, structure was seen in the distribution of galaxies that lie in the plane of the Milky Way Galaxy and hence cannot be seen optically.

The Parkes Multibeam Receiver has been a most successful instrument that has allowed observing programs that could not have been otherwise carried out.