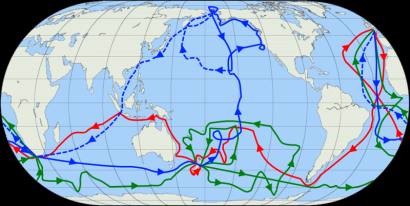 A chart of the three voyages of James Cook. Red indicates the first voyage, green the second and blue the third. Courtesy Jon Platek and Wikimedia Commons

A reviewer of my book Transit of Venus: 1631 to the present in the April 2012 issue of the Bulletin of The Pacific Circle queries my reference to Cook’s first voyage (1768-71) as his ‘most famous’. The reviewer, who has strong links to Hawaii, suggests that it could have been his last – ‘the voyage that led him to the [European] discovery of Hawaii?’

As an astronomer and an Australian I plead guilty of bias towards the first voyage as it was on that voyage that Cook observed the transit of Venus and on his return voyage his ship became the first European one to reach the east coast of Australia. However, I do realise that the view from Hawaii could be very different.

Accordingly, let us have a quick look at the three voyages and their achievements.

We have already discussed a number of aspects of Cook’s first voyage such what telescope was used to observe the transit, why Cook sailed to Tahiti and how he navigated there. Here we will briefly summarise the voyage. Departing England in July 1768, Lieutenant James Cook in charge of HM Bark Endeavour sailed to Tahiti. Endeavour reached the island after a voyage of eight months, during which none of its crew had succumbed to the disease scurvy, which was most unusual for the times.

At Tahiti Cook and his astronomer Charles Green observed the transit more successfully than they had realised. After the transit Cook followed his orders to search for the non-existent Unknown Southern Land until reaching New Zealand. There he spent six months charting the coast before departing for the east coast of the land known as New Holland. He followed the east coast towards the north charting as he went and claimed possession of the country on behalf of the British Crown. 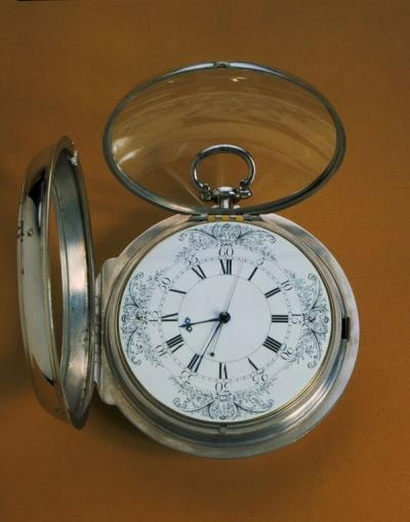 The aim of this voyage was to search once again for the Unknown Southern Land. A secondary aim was to test out navigation using chronometers, clocks that can function in spite of the motion of a ship and the great variation of temperature to be expected. On board the Resolution he had K1, a copy of Harrison’s prize-winning chronometer H4 and Arnold No 3 while the second ship on the voyage Adventure had two Arnold chronometers. Of the two used by Cook, K1 kept excellent time so that Cook wrote, ‘Mr Kendal’s Watch has exceeded the expectations of its most Zealous advocate’, but the Arnold did poorly.

During the voyage Cook sailed further south than any explorer had before, but did not find Antarctica as ice and weather conditions blocked his way. During his exhaustive search of the Pacific he found or visited a number of islands such as Easter Island, the Tongan Group, New Caledonia and South Georgia.

On this his final voyage, Cook was trying to find a route from the Pacific to the Atlantic round the top of North America. He was again on board the Resolution while the accompanying ship this time was the Discovery.

After observing an eclipse of the Sun from an island Cook named Christmas Island, Cook and his crew became the first Europeans to find the Hawaiian Islands. They made a short stop for water and went on with searching for the North West Passage. Not meeting with success, the ships and the crews needed rest so Cook sailed towards the Hawaiian Islands, landing at Kealakekua Bay on the Big Island of Hawaii. At first all went well, but later after a departure and an emergency return for repairs disaster struck and Cook was killed by the islanders on 14 February 1779.

On his first voyage Cook solved the problem of scurvy that had plagued seamen on long voyages, observed the transit of Venus, charted New Zealand and the east coast of Australia. To me, and I may be showing my biases here, this voyage still seems to me to be the most important, successful and famous of the three. However, I do understand that someone from Hawaii would vote for the last, sad, voyage instead.