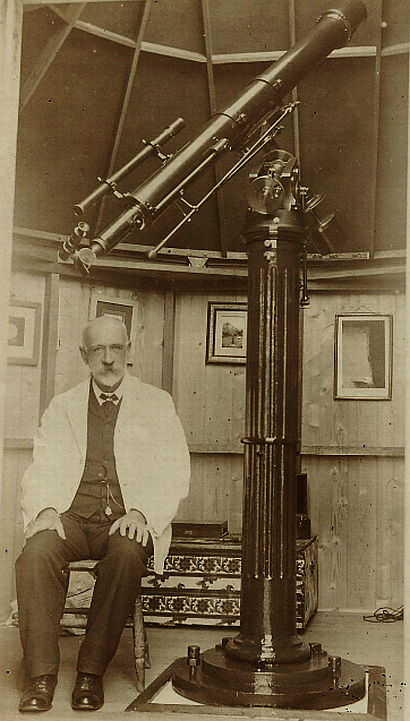 The amateur group associated with Sydney Observatory, the Sydney City Skywatchers, has a significant lens telescope that is associated with two significant people. The telescope was donated to the group under its original name, the New South Wales Branch of the British Astronomical Association in 1924 by Ernest Henry Charles Wunderlich. Hence today the telescope is known as the Wunderlich Telescope. 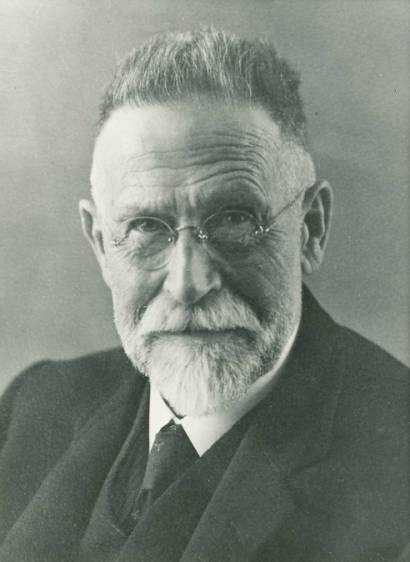 Photograph of Mr Ernest Wunderlich in 1909. Picture courtesy of the Powerhouse Museum

Ernest Wunderlich did not just donate the telescope, but his entire observatory and its contents including a small transit instrument and a chronometer. At the time the Sydney Morning Herald called the donation, ‘a munificent gift’:

Mr. Ernest Wunderlich, F.R.A.S., founder and chairman of directors of Wunderlich, Ltd., has given to the New South Wales branch of the British Astronomical Association, of which he is vice-presldent, his private observatory, as well as the building Itself, for the use of amateur astronomers in Australia.

It is a munificent gift in the cause of science.

The Herald article refers to the telescope as a ‘Cooke telescope’. This maybe because James Parkes & Son of Birmingham did not manufacture the lenses of their telescopes and the lens for this telescope may have been made by T Cooke & Sons.

Wunderlich was a successful businessman who had arrived in Sydney in 1885 at the age of 26. In 1908, together with his two brothers, he founded Wunderlich Ltd that made pressed metal ceilings and terracotta tiles. The firm continued to operate until 1969 when it was taken over by Colonial Sugar Refining Co. The Powerhouse Museum has a large collection of items and records from the firm’s old works at Redfern in Sydney.

Ernest had many interests outside his business including music and he helped to found the New South Wales State Conservatorium of Music as well as being president of the trustees of the Australian Museum at one stage. By 1915 Ernest had caught the ‘astronomical fever’ and became involved in astronomy. To provide himself with suitable instruments, he purchased the telescope and observatory that had belonged to the amateur astronomer William Macdonnell and set up the observatory at his holiday home at Gunnamatta Bay, Port Hacking. After using the equipment for a few years he must have wanted more time to pursue his other interests and hence donated it all to amateur astronomers.

William John Macdonnell, whose equipment was purchased after his death by Ernest Wunderlich, was a leading amateur astronomer of his time. He was a banker by profession and in 1882 he was promoted to branch manager at Port Macquarie in NSW. In 1874 he was one of the astronomers involved in observing the transit of Venus under the direction of Henry Chamberlain Russell of Sydney Observatory.

At one stage of Macdonnell’s life he had to sell his main telescope, but he replaced it between August and November 1907 with the 4¾-inch (12.1-cm) Parkes telescope. This telescope was mounted equatorially so that it could follow the motion of stars and it had a clock drive that was locally made by a local instrument maker E Esdaile.

We know of a number of observations that Macdonnell made with this telescope: on 11 January 1908 he observed Saturn’s rings as they were almost edge-on. On 6 April 1909 with his wife he observed an occultation and eclipse of Jupiter’s satellite Ganymede. On 19 April 1909 he observed Comet Morehouse and on 1 December of that year he had his first view of Comet Halley. On 4 November in 1909 he observed Mars and saw a white spot about 25° from the south pole of the planet.

William McDonnell could not make further observations with his new telescope as he died in September 1910 aged 67.

The Wunderlich Telescope in its long history has had connections with a leading Australian amateur astronomer and a highly successful Australian industrialist. The telescope is thus of great historical significance and it is to be hoped that its current custodians the Sydney City Skywatchers will find a suitable permanent depository for the telescope.