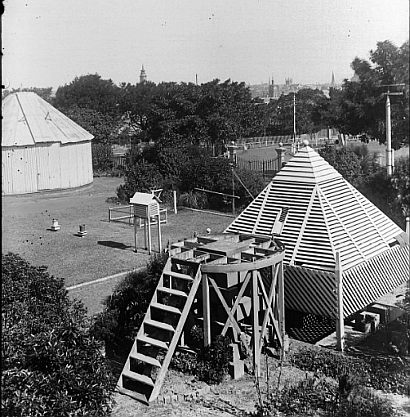 In this photograph from the early 1900s, the stone survey marker in front of Sydney Observatory is surrounded by what appears to be an uncompleted wooden platform. The white thermometer shed is adjacent to the survey marker while the Observatory’s meteorological instruments can be seen on the lawn behind it. The large structure on the left is the dome for the astrographic telescope that was still standing, although the telescope itself had been moved to Pennant Hills. Photo Powerhouse Museum

The historic stone pyramid that stands in front of the Observatory is a survey marker or trig station. It is marked as the latter in an 1880 plan of the Observatory drawn up by its then director, Henry Chamberlain Russell. In the plan the trig marker is drawn as circular suggesting that the timber platform seen in the image above was a permanent structure. 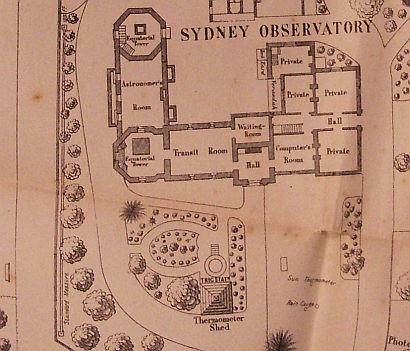 A detail from Henry Chamberlain Russell’s 1880 map of Sydney Observatory and its surroundings. The survey marker is denoted as Trig Statn and is drawn as circular. Powerhouse Museum

The marker stands on the Sydney meridian, which is the line passing through the Observatory’s Transit Circle Telescope and running north-south. By observing stars, astronomers using the Transit Circle could establish both its longitude – how many degrees it was located to the east of Greenwich Observatory – and its latitude – how many degrees it was to the south of the equator. Thus the longitude of the survey marker was precisely known and its latitude could be easily calculated from the slight offset in distance from the telescope just inside the building.

The platform with steps leading up to it suggests that surveyors would climb to the top of the marker with their theodolites and measure angles to landmarks that were visible. With these angles they could use triangulation or trigonometry to draw up their maps. 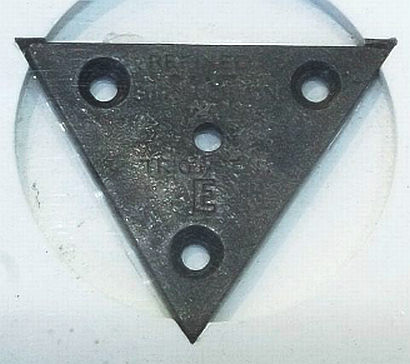 The small triangular marker for Trig Station E that was on top of the tower of Sydney Observatory. Powerhouse Museum

As the area around the Observatory became built up in the late 19th and early 20th centuries, gradually the view of distant church steeples and other landmarks would have been lost. Presumably this explains why a new survey marker was placed on the top of the Time Ball Tower, from where surveyors had excellent views over most of Sydney. It is not known when Trig E was first placed on top of the tower, but the existing marker in the collection of the Powerhouse Museum is inscribed: REFIXED/SUR. RICHMOND/[1927]/TRIG STN./E.

Surveyors were still using Trig E in the late 1970s and early 80s. They would have to haul their theodolites up the steep stairs to the top of the tower. The main concern of the Government Astronomer in charge of the Observatory was that the spikes at the bottom of their theodolite tripods could damage the flat roof of the tower and the surveyors had to promise to ensure that that did not happen.

In the 1980s surveyors stopped using Trig E and the marker was removed during a subsequent refurbishment of the roof of the tower.

Recently, at the request of the Observatory, staff from the NSW Department of Lands replaced the survey marker on top of the tower and re-established its position with the latest GPS techniques. Now known as Observatory E, its coordinates are:

Buried deep in the archives of Sydney Observatory and the NSW Department of Lands there is probably much more information on the stone survey marker than outlined here. In the meantime though if there are any surveyors out there who know more of the story, or used Trig E in the past, please make a comment on this post or contact Sydney Observatory. Any information would be much appreciated.