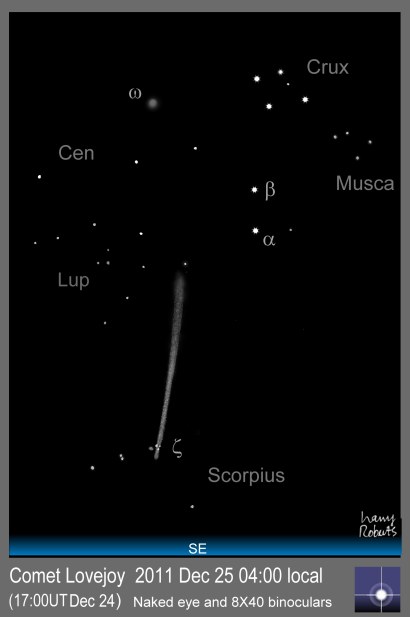 A sketch of the 20° long tail of Comet Lovejoy, discovered by Australian astronomer Terry Lovejoy. Image and copyright Harry Roberts ©, all rights reserved

Comet Lovejoy is a sensational comet! It strongly reminded me of the bigger and much brighter Ikea-Seki of 1965 – as both resemble the beam of a searchlight.

And the two are both sun grazers – Lovejoy barely surviving a very close approach to our star. SDO imagery shows the nucleus being buffeted by strong magnetic fields in the solar corona – and no doubt much of the icy volatiles that make up a comet nucleus were lost in the process.

Cloud in Sydney had frustrated early attempts to view Lovejoy from the suburbs – my current abode is very light polluted, but does have a good southern sky vista. Plotting the comet on charts showed the nucleus was near Zeta Scorpii – but the Spaceweather data gave no indication of Lovejoy’s enormously long tail.

Accordingly, at 4:00am (local, Dec 25) I swept the sky with 8X40 “binos” in vain – for a minute or so. Then the naked eye revealed a vast vertical column of grey light – one that stretched from Zeta Sco almost to the “pointers”! The tail was about twenty degrees long!

I plotted the major naked eye stars in the sketchbook, and tried to establish where the huge tail began and ended. It was not hard to trace the “nucleus” end of the tail – it was sited just east of Zeta Sco – but there was no nucleus. Over the years I’ve seen few comets with no stellar nucleus – but this was one. That close encounter with the sun must have left the comet without a solid central nucleus – perhaps we are seeing just the plume of volatiles being swept away from the sun. The whole tail from end to end seemed to have no brighter points within it.

The far end of the tail almost reached star Zeta Lupi –35 or more full moons in length! But it is faint when viewed in an urban setting : it would be spectacular from a dark site. The more eastern half of the tail was clearly brighter than the rest. I could see no separation of the tail into dust and plasma tails.

Several binocular fields were needed to scan the whole tail – and it is faint from my site. The sky was cloudless and star images were steady. Several nice deep sky objects could also be seen – huge globular Omega Cen chief among them. At the comet’s “head” end the yellow-orange triple star Zeta Sco showed well with rich galactic cluster NGC 6231 beside it. Also “Herschel’s Jewel Box” NGC 4755 sparkled invitingly beside Beta Cru (not sketched). It was a nice sky.

Dawn arrived quickly, and by 04:15 the slender vertical column of grey light was fading – by 04:30 it was gone. Still, it was a remarkable view, which the sketch attempts to capture. While the tail will probably grow longer, and may be a fantastic target for digital photography, it probably won’t grow brighter.

Do take a look. Probably the best city views would be from the coast with the city lights out of sight. Or make the long drive to a dark mountain top west of Sydney. Don’t delay – or you will miss a truly great comet.