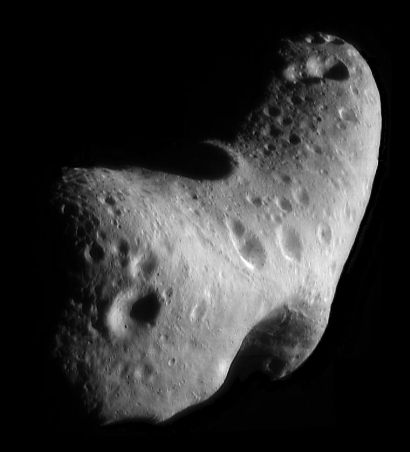 A mosaic image of 433 Eros made by the NEAR Shoemaker spacecraft on 29 February 2000 while circling the asteroid. The asteroid is roughly a cylinder in shape with a length of 34 km and a diameter of 11 km. Image courtesy NASA/JPL/JHUAPL

The asteroid 433 Eros is of great historical significance for its close approaches to Earth enabled astronomers to make an accurate measurement of its distance and hence the distance of the Sun to Earth. The value of the solar distance provided by observations of Eros, ended two centuries of effort to determine that distance using observations of the Transit of Venus.

The asteroid is making its closest approach to Earth in 37 years in late January and early February in 2012. Having this event in the same year as a rare transit of Venus is a fortuitous historical coincidence.

The minor planet or asteroid 433 Eros was discovered by two astronomers, Gustav Witt at Berlin and Auguste Charlois at Nice, on the night of 13 August 1898. When astronomers calculated the path of the newly discovered asteroid around the Sun they realised that the path has the shape of a somewhat elongated oval and the asteroid’s average distance from the Sun is less than that of the planet Mars. These two factors mean that that Eros can on occasion come relatively close to Earth providing an opportunity for its distance to be measured accurately.

The approach of Eros in January/February 1931 was a particularly favourable one with a minimum distance from Earth of about 25 million km. Before the event the Royal Greenwich Observatory astronomer Harold Spencer Jones explained in the Astronomical Journal what kind of observations were necessary to secure the distance of Eros:

The position and path of 433 Eros on 1 February 2012 with respect to the Earth, Mercury, Venus and Mars. Courtesy JPL Small-Body Database Browser

In 2012 Eros will not approach quite as closely as 81 years earlier, but at a distance of 26.7 million km it is still a fairly close approach. Of course, there is nothing to fear and there is no risk whatsoever to the planet Earth.

In late January and in early February 2012 amateur astronomers should easily be able to find Eros with a small telescope. Its magnitude at that time is expected to be 8.6 which should be bright enough to ensure visibility despite a bright Moon that ranges in phase from first quarter on 31 January to full on 8 February 2012. In the early evening after dusk Eros is low in the eastern sky.

To those with small telescopes, good luck in finding and observing Eros!

Postscript: There is now  a good finding chart, created by Sky and Telescope magazine, that will help you locate 433 Eros in the sky. For Australian use invert the chart and look due east in the evening around 10:00pm to see Leo rising. Each dated tick-mark shows the position at 11:00am AEDT for that date. Use these tick-marks to estimate the asteroid’s position, then look through your telescope for the extra ‘star’ -Andrew Jacob

6 responses to “Eros is coming!”