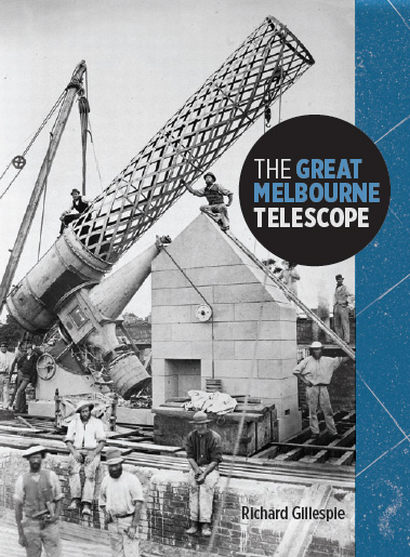 The cover of the Great Melbourne Telescope by Richard Gillespie. Courtesy of the Museum of Victoria

In November 1868 the ship The Empress of the Seas arrived in Melbourne carrying the disassembled parts of what was to be the largest steerable telescope in the world, the Great Melbourne Telescope. This large telescope with its 48-inch or 1.2–m wide metal mirror was installed and ready for use in its sliding-roof housing at Melbourne Observatory by the middle of the following year.

The absorbing story that led up to the arrival of this famous instrument is ably told in a new book by Richard Gillespie, the Head of the History and Technology Department at Museum Victoria. Some of the leading astronomers in Britain are involved in the story as is some complex politicking in the Colony of Victoria.

William Wilson, the young professor of mathematics at the new University of Melbourne, was the originator of the idea of a large telescope for Melbourne and its strongest champion. Though there was immediate support for the idea, at the time in the second half of the 1850s there were also competing proposals for scientific projects. One proposal put forward by the German scientist Georg Neumayer, was for the establishment of a magnetic and meteorological observatory. Richard Gillespie does not shie away from quoting Wilson’s xenophobic reaction, ‘it would be a scandal if a foreigner should have the honour of carrying out such an important task’.

Eventually Wilson compromised and agreed to combine Neumayer’s observatory with the existing small astronomical observatory at Williamstown into a new Melbourne Observatory that would house the new telescope. With the establishment of the new observatory next to the Botanical Gardens Wilson could start seeking support both in Britain and in Victoria in earnest. After many trials and tribulations discussed in the book the contract for the telescope was signed on 19 February 1866.

The arrival of the GMT in Melbourne is, of course, just the early part of the story. The book goes on to tell of the operation of the telescope at Melbourne Observatory, the variety of fascinating characters associated with it and the controversies that surrounded it. Surprisingly, we find out from the book that the telescope did not just fade into obscurity, but had a new life at Mt Stromlo Observatory near Canberra from the 1950s onwards. At Stromlo it first became the 50-inch Telescope and, more recently, once again as the Great Melbourne Telescope it became a fully automated telescope searching for a form of dark matter called MACHOs.

One concern I have about the book, and that should come as no surprise to anyone including the author, is the claim on page 34 that ‘Melbourne would have the pre-eminent observatory in Australia for decades to come’. The main other observatory in Australia during the second half of the nineteenth century was Sydney Observatory and the statement indicates a value judgment between the two institutions. In the 1870s Henry Chamberlain Russell, the director of Sydney Observatory, built up the staff and resources of his observatory so successfully that their contemporaries treated Russell and his friend Robert Ellery at Melbourne Observatory as equally pre-eminent in the Australian science of the late 19th century.

My one concern aside, the book relates the story of one of the most important artefacts in the history of Australian science. The book is highly readable with Richard Gillespie carefully putting events in the context of the times. An unusual aspect is the inclusion of short almost fictional pieces at the start of each chapter such as ‘Robert Ellery sat at his desk, searching for the right phrase’, that helps to bring the people and events described alive.

I strongly recommend the Great Melbourne Telescope to anyone with any interest in the history of Australian astronomy and science, whether they are based in Melbourne or in Sydney or elsewhere in the country.

PS1: I purchased the book for the full retail price at its launch on 22 November 2011. Richard Gillespie kindly signed my copy with the words: ‘From one investigator of astronomical heritage to another’.

PS2: Previous posts on the GMT on the Sydney Observatory blog are here, here and here.