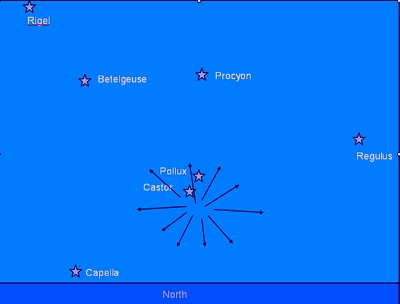 This is the spot in the sky from where the Geminid meteors originate, known to astronomers as the radiant. Drawing Nick Lomb

Every year at this time the Earth runs into a stream of dust circling the Sun. As it hits the stream the dust particles burn up 100 km or so above us. As they do, each dust particle leave behind a streak of light – a meteor. These particular meteors all appear to originate from a point in the constellation of Gemini and hence they are known as the Geminids. The meteors can appear anywhere in the sky, but if you trace them back, you will see that they originate from Gemini.

In 2011 the Geminid Meteor Shower is expected to peak around midnight on the morning of Thursday 15 December in Australian time. From Australia the best time to view is in the early morning before dawn, say between 2:00 and 4:00 am summer time. Unfortunately, a gibbous Moon is in the sky, possibly disturbing the viewing of faint meteors.

As indicated in the diagram above look towards the north, but note that the meteors can appear anywhere in the sky. Despite the Moon, it is best to observe from as dark a sky as possible. If you cannot leave the city, you can still try to find a suitable location. For Sydneysiders it could be looking from Bondi Beach. Of course, the sky needs to be clear as you would not expect to glimpse the meteors though cloud.

How many meteors can you expect to see? At the peak of the shower, from a dark site, with Gemini high in the sky, almost two meteors a minute are expected. With the gibbous Moon in the sky, the rate is likely to drop to at least a half. Plus Gemini is low in the sky and that also cuts the rate. So even from a dark site the best that can be expected is a meteor every two or three minutes. However, the Geminids are known for bright meteors, especially after the peak, so it is still worth watching.

Of course, there is now an app (iPhone or iPad only at present) to report your observations. Good luck with your meteor watching!